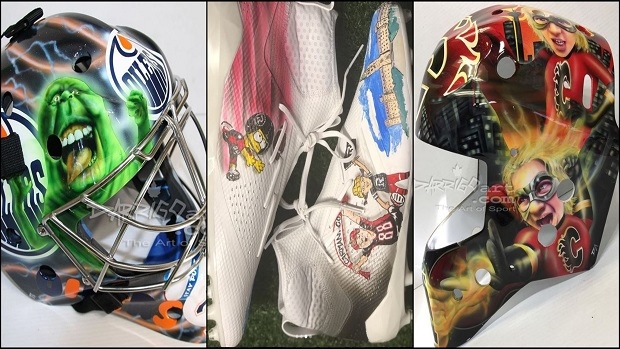 It doesn’t matter if it was in class, a meeting, or just on your own spare time, we’ve all spent some time in our lives doodling random designs and ideas onto a blank piece of paper.

But what if you had the ability to turn your artistic ability and passion into a career? Would you move forward and take the risk hoping it works out and that your artwork will be able to pay your bills and get put on display for the world to see, or would you take the safe route and stick doodling on the blank piece of paper that makes its way into the trash?

For Canadian artist David Arrigo, he took the risk and it’s worked out quite well in his favour.

“It's been an interesting year, I've never been so busy,” said Arrigo, who recently teamed up with the CFL and Adidas to create custom cleats for players.

“The taste in fine art has re-emerged again with everyone getting into computer graphics and the crazy stuff they can do, and it’s also led to more people wanting the human touch these days. The CFL teamed up with Adidas and approached me about doing some cleats for certain players for the Family Days for their respective teams.”

“It's probably one of the more difficult surfaces that I've worked on,” Arrigo continued. “There are just so many folds and different textures that it doesn’t allow me to put in the full detail that I’m used to putting in. It’s a much more challenging project, but a lot of fun nonetheless.”

While Arrigo never designed custom cleats for anyone before he started working with the CFL and Adidas this season, surface painting wasn’t an entirely new world for him as he got his first taste of it many years ago.

“I was a little nervous about the surface painting because many, many years ago the Toronto Maple Leafs with Colton Orr, way back when, approached me to paint his skates. His mother had recently passed away with cancer, so we did a basic pink skate with a little design to it. To my knowledge, those were the first pair of skates ever allowed by the NHL to ever be painted.”

Arrigo got his first real start in the NHL doing live murals at league events in different parts of the world. From Canada to the United States to Japan, Arrigo has been around the world thanks to his artwork and it’s something he hasn’t taken for granted.

“Live murals have morphed into a project of its own. It has taken me from Toyko, Japan, when I did work with the NHL in 2001 or 2002, to playing ball hockey with the troops in Afghanistan in 2010 at the Kandahar Air base with NHL Alumni, it has turned into a great program and a lot of fun and the great thing about these pieces is that they change and no piece is ever the same.”

As some of you may know, some years ago I traveled to Kandahar Air Base in Afghanistan in support of our troops. It was beyond an incredible experience that allowed me a first hand glimpse into the day to day life of our brave soldiers. To this day and forever those memories remain where as I can say that during this trip life long relationships were created. Some may recognize a number of faces in these photos. Team Canada was made up of different entertainers in their own right. I am greatly honoured to say that I have been once again been invited to travel overseas in support of our troops. God bless all that have and continue to serve, we cannot thank you enough for your sacrifices.

The Canadian artist got his start in the NHL doing live murals at events, but it turned into another job that he never imagined doing until he was approached by Mike Smith’s father when he was doing a job in Dallas.

“I was at the NHL All-Star Game in Dallas at the time and I had no interest in masks at the time. It was funny, though, because I was in Sweden a few years before for a live mural experience with the Toronto Maple Leafs and I met a young fellow by the name of Dave, who is Daveart, of course, one of the most prolific artists in the NHL doing masks and he said to me ‘Why don’t you start getting some masks done?’, but I didn’t really have an interest in it and now here I am.”

While he won’t admit that the first mask he ever designed for Mike Smith is his favourite piece, Arrigo did admit that it holds a special place in his heart considering it was his very first NHL mask.

“It's almost like asking a parent who their favourite child is. Each piece is truly unique. I won’t say it’s my favourite piece, but it was definitely the beginning of my mask career and it made a lot of people think I had been doing it longer.”

Once his artwork got out in the open Arrigo’s client list started to expand. Carey Price, Brian Elliott, and Brian Johnson, to name a few, reached out to Arrigo and had him design their masks for them.

“I've been lucky with a good stall of players like Smitty, Carey Price in the past, Brian Elliott, Brent Johnson from the Penguins at the time had interesting masks that were all Led Zeppelin based.”

Whether it’s cleats, a goalie mask, or a live mural, Arrigo is always finding different ways to stay busy and get his name out there through his artwork and he knows there might be more things he might need to start expanding to down the road, depending what trends upwards next.

“I've been very fortunate in the sense that I keep myself busy daily. I don’t know where I’ll be in a year from now or 10 years from now, so I enjoy it day by day and hope it continues for many, many years to come,” said Arrigo.

“One thing as an artist I realize is I have to reshape myself. Not necessarily my style, which I have done recently in a Bobby Orr painting that raised $27,000 towards charity, I have to evolve. Whether it’s surfboards or cleats or goalie masks, I love the new challenges, that’s for sure.”

We’ve seen Arrigo master goalie masks, live murals and cleats over the years, so we’re excited to see which challenge he takes on next.