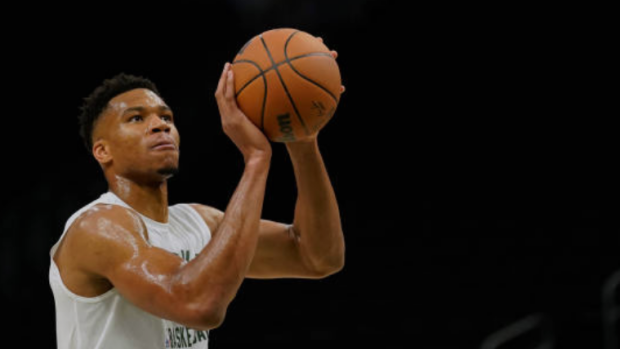 Giannis Antetokounmpo is an NBA Champion after leading the Milwaukee Bucks on an incredible title run. While we are all for the hilarious offseason Giannis content, we are also excited to see the Greek Freak get back out on the court.

With preseason wrapping up this week, we got our first taste of the 2021-22 Giannis. While he still possesses the same length and rim presence that makes him such a dominant player, he’s also flashed some improvements in other areas. He’s been shooting the ball a little more, but the most entertaining adjustment has come from speeding up his free throw routine.

If you watched the playoffs last year, you already know how much of a storyline Giannis’ free throw tardiness became. He was even given a violation for taking too long, and it became common place for opposing fans to chant out the seconds each time Antetokounmpo stepped up to the stripe.

This year, though… this year is different…

Fans quickly strapped on their sarcasm shoes and hit the internet.

Giannis has a 5 second free throw now. LEAGUE IN SHAMBLES. 5 days til tip off 🥰

He updated his IOS to the next level in the off season. Mfs in trouble https://t.co/TYiJ6m5vLl

Is there anything he can't do? https://t.co/oK1tKCW5Sj

Heat fans when they have to stop counting at 4 now https://t.co/jSA3hTHAZp pic.twitter.com/2jqv63BKdX

It's over for the Association. https://t.co/CXcSzpv1R3

Bro giannis coming out the gate like a raging bull this season https://t.co/Ngl6lBaVjy