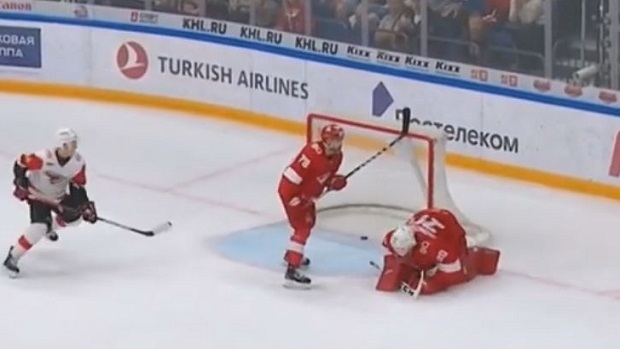 The NHL preseason is right around the corner, but the KHL regular season is already underway.

On Tuesday night, Spartak Moscow and Avangard Omsk went head-to-head in a back and forth battle and it ended in the most unusual way possible.

Locked in a 2-2 tie in overtime, former NHLer Taylor Beck got a glorious chance to win the game but was stopped by Pavel Khomchenko. However, before the referee was able to blow the whistle to stop the play, Khomchenko made the most brutal error of his career as he swiped the puck right past his pads and into the net.

The visitors had scored with eight minutes left to tie the game and to force overtime, but their efforts went to waste courtesy of Khomchenko’s brutal error.

That’s definitely the easiest goal Beck has ever scored in his career, and even better that it was an overtime game-winning goal.