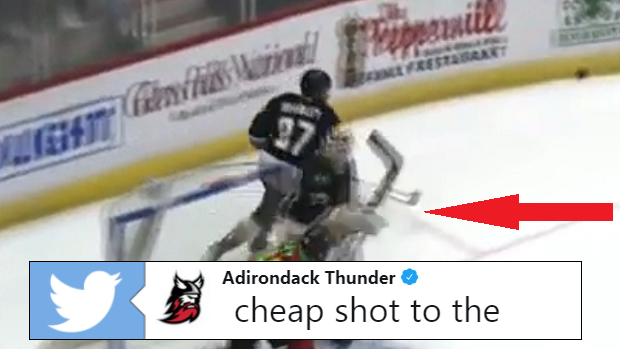 Conor Riley of the Adirondack Thunder gets slashed by goaltender Michael Garteig. , r/Hockey

Karma can be a huge pain in the behind at times when you’re not careful. Just ask ECHL Newfoundland Growlers goaltender Michael Garteig, who found that out the hard way over the weekend in a game against the Adirondack Thunder.

All eyes were on Garteig after he was clearly caught delivering a vicious slash on Thunder forward Conor Riley after he skated in front of his crease. Riley (44) immediately went down in pain and appeared out for the count, but managed to bounce up and play through the pain. It’s a good thing for the Thunder that he did because he managed to light Garteig up not once, not twice, but THREE times people. Talk about rubbing it back in an opponent’s face.

Michael Garteig gives Conor Riley a cheap shot to the mid-section as he skates after a puck and we have a little delay to try and get Conor some help to the locker room.

No penalty on the play. The boos rain down.

That was just nasty Michael, come on man! Here’s a look at Riley’s heroic performance.

And to no surprise, Riley expressed some frustration after the play. At least he managed to get the last laugh?

“I told him [Garteig] he was in for a long night. We were going to pound the net with shots.” - ⁦@cRomeo44⁩ pic.twitter.com/vSOBOi7daw

Well… he kind of got the last laugh. According to the team’s beat writer Will Springstead, Riley was in bandages after the game and was not in uniform for the Thunder’s following contest against the Reading Royals.

The hockey gods giveth and taketh away. Cam Johnson is down from Binghamton and will man the cage today, but Conor Riley is not in uniform. He was wearing tape in a couple of places when we interviewed him following the game. Once again, gutsy effort last night.

Conor Riley, you are the definition of a #HockeyGuy. Well done!