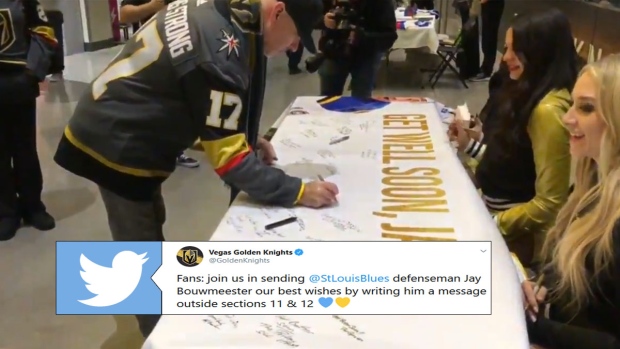 There was a scary scene in Anaheim earlier this week as St. Louis Blues defenceman Jay Bouwmeester suffered a cardiac episode on the team’s bench.

Thanks to the quick reactions and work by the medical personnel in attendance the 36-year-old defenceman is alive and well.

On Thursday night, the Blues were in Las Vegas to wrap up their mini two-game road trip and the hosts did something very classy to show support for Bouwmeester and the Blues after the scary incident.

Fans: join us in sending @StLouisBlues defenseman Jay Bouwmeester our best wishes by writing him a message outside sections 11 & 12 💙💛 pic.twitter.com/gI6himVW5K

The Golden Knights set up a table on the concourse with a giant banner on top that reads; “Get well soon, Jay!” and they invited fans from both teams to sign it at some point in the night.

That’s an extremely classy move by the Golden Knights.