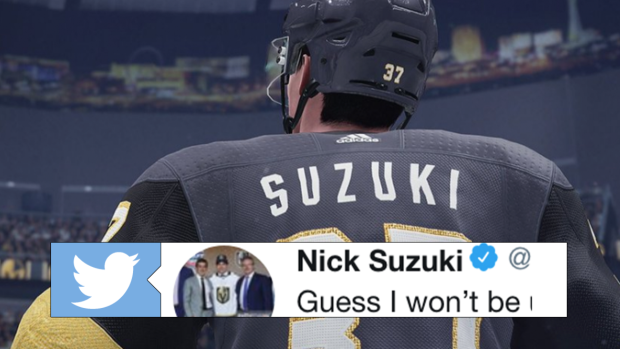 It's NHL 19 ratings week!  EA Sports has been counting down the top-50 players in the newest instalment of the popular hockey video game franchise and the countdown will continue Friday with players 20-11.

The top-50 players aren't the only ones we know ratings for, though.  A number of players have taken to Twitter this week to reveal what their rating is in NHL 19 and Nick Suzuki is one of those players.

Vegas' first-round pick in the 2017 draft had his best season yet last year for the OHL's Owen Sound Attack with 100 points in 64 games and he'll be looking to crack the Golden Knights' roster this year.  Despite his success in the OHL, Suzuki's NHL 19 rating isn't amazing, but he had some fun with it on Twitter:

Guess I won’t be using myself again this year for Ultimate Team but I’m still excited for NHL 19! What does everyone else think of my rating? #NHL19Ratings @EASPORTSNHL pic.twitter.com/CEfQ2XnZhx

You have to appreciate Suzuki chirping himself and putting success in HUT ahead of playing as himself in the popular game mode.

You also have to appreciate his brother Ryan's savage response to his 67 rating.

The good news for Suzuki is his rating can only go up from here, especially if he does well in the AHL or NHL this season.