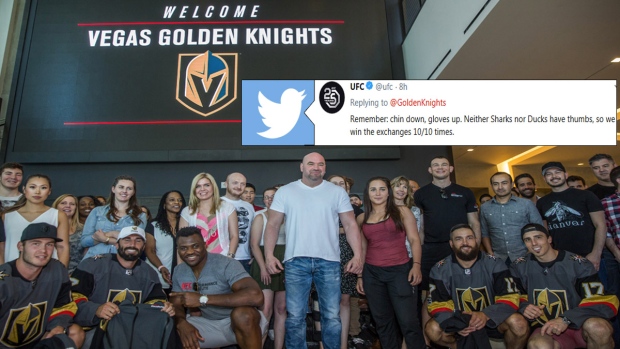 The Vegas Golden Knights made history a couple of nights ago when they picked up their first playoff series victory in franchise history and they did it in dominant fashion by becoming the first team to advance in this year’s postseason.

got any advice for us between rounds?

Ok @GoldenKnights, the first round was clearly a 10-8 round. Now it’s time to keep the same game plan, and keep attacking. Be first! https://t.co/MPxxHssYY7

The Golden Knights’ social team reached out to the UFC for some advice on killing time in between the first and second round and it seemed to spark a brand new Twitter friendship.

We fortunately have more than a minute to recover and get ready 😜 https://t.co/jvRY8ytEgJ

Remember: chin down, gloves up. Neither Sharks nor Ducks have thumbs, so we win the exchanges 10/10 times.

Although the Golden Knights got the first round out of the way as soon as possible, they’ll be going up against a team that will  have almost as many days off in between series as them as the San Jose Sharks also swept their way into the second round.

The first matchup of Round 2 is set. Do the #GoldenKnights have the advantage? 🔥🤔

However, while both teams already know what the second round has in store for them, the series won’t get underway until the rest of the first round series wrap up, meaning both teams have another week or so off to prepare.