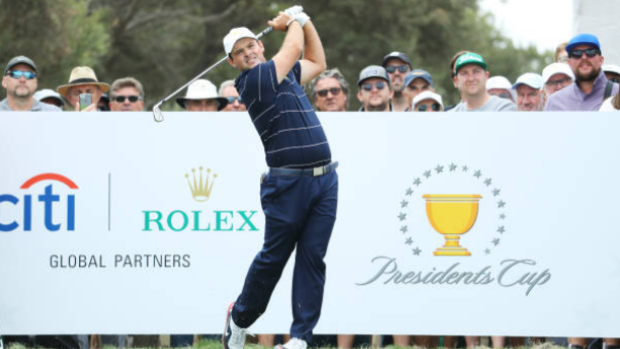 Patrick Reed is going to be hearing it from the haters for a long time.

Last week at the Hero World Challenge, video surfaced of him moving the sand behind his ball in the bunker, a clear no-no in the golf world. Not only did he cheat, he did it twice right in front of a crystal-clear high-definition videocamera.

A week later, Reed is on the US Presidents Cup matched up against the International Squad at Royal Melbourne Golf Club in Australia.

When Reed teed off at the first hole on Wednesday, the fans down under were letting him hear it.

Fan at the President’s cup to Patrick Reed. “Patrick are you really going to make your caddy carry 14 clubs and a shovel?!” #PresidentsCup #pgatour pic.twitter.com/Vylqsv2ZQm

Check out the reception from when his shot went back into the bunker.

The the fans cheered loudly when his tee shot went into the bunker. #PresidentsCup #patrickreed #pgatour pic.twitter.com/5MqbjLFH9G

It isn't only fans teasing him, either.

On Tuesday, Justin Thomas found himself in the sand and ribbed Reed.

Patrick Reed gets absolutely owned by Justin Thomas in a bunker!
"IS THIS HOW YOU DO IT P?"#PresidentsCup #Reed #TigerWoods #Golf #Funny
🎥adelehuggard pic.twitter.com/FcvbVYkolX

This is why you don't cheat, people!