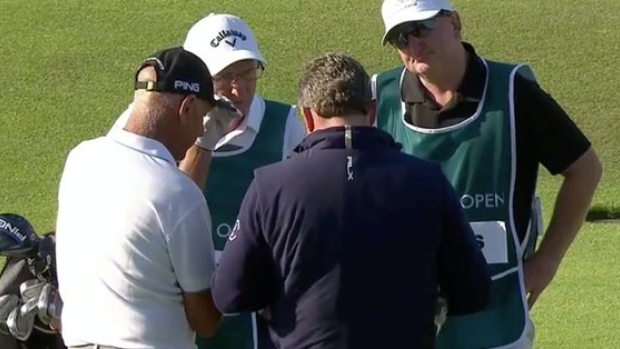 Randy Johnson was an intimidating presence on the mound. The 6'10" lefty dominated hitters with his overpowering fastball that reaches triple digits on the regular and could mix in a deadly slider and sinker that would cut right through the zone.

Back in 2001, Johnson literally threw a deadly pitch that took the life of a poor dove, one of the most infamous moments associated with Johnson's illustrious career.

The Canadian Open isn't the only significant golf tournament going on right now. Over in Scotland at the historic St. Andrews golf course, the Senior Open is currently underway. Mark James, who's won 18 times on the European Open, had his own Randy Johnson experience, but on a whole other level.

In whats considered to be one of the more challenging holes of at the course, James stepped up to the 17th hole hoping to make straight contact. What happened next will surely make you watch the video twice. James' tee shot took out a seagull right after he made contact with the ball. Have a watch yourself.

Unluckiest golf shot of the year?

Mark James' tee shot on the famous 17th hole on the Old Course, St Andrews hits a bird before going out of bounds. #SeniorOpen pic.twitter.com/jow7G0YbqN

Talk about unlucky contact for James and back luck for the poor 'gull.

What are the chances? We've seen balls hit birds and animals farther down closer to the pin, or bounce around nearby spectators. But for it to happen right when James took his shot is pretty wild. Going into the shot, James was two-over par but ended up with a triple-bogey on the hole after. He finished the first round of the tournament with a score of 77.

James came in looking to hit a birdie on the hole, but literally ended up hitting a birdie and saw his ball lands out of bands. Poor little birdie. We're not quite sure if the seagull is alright, but it's safe to say he's going to be feeling that one for a few days.

(h/t Staysure Tour via For the Win)