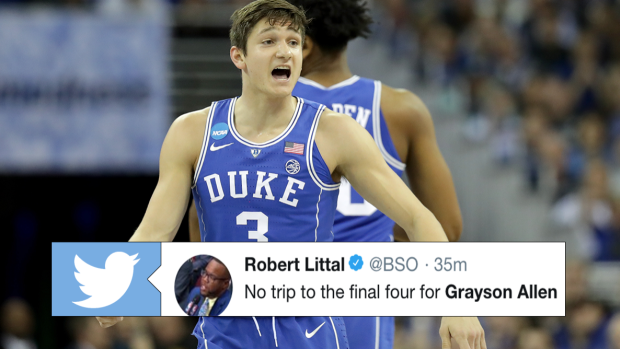 The final game of the Elite 8 was a heavyweight bout between Kansas and Duke and the game lived up to the hype to say the least.

Grayson Allen for the win and it doesn't fall! Kansas (1) and Duke (2) are going to overtime! pic.twitter.com/lxOVs3Uwv5

After going shot for shot in the closing minutes of regulation, Grayson Allen missed a potential game-winning shot which led to overtime.
In OT, Kansas managed to pull out the thrilling victory and the internet couldn't have been happier that Duke was out and that the game lived up to its billing.

GAME OVER>>> ROCKCHALK JAYHAWK!!! What a game huh @JJRedick

Never thought we’d say this but THANK YOU KANSAS!!!!

Did Kansas just end Grayson Allen's college career or are we tripping?

America wins every time Duke is knocked out of the tourney. Thank you, Kansas!

No trip to the final four for Grayson Allen pic.twitter.com/EVEogt8vQ6

Grayson Allen must have bad karma cuz his shot was in

Grayson Allen didn’t trip an opponent today but he tripped up his own team after a 3-13 shooting performance, including 2-9 from three point range. That must suck.

Grayson Allen’s career at Duke comes to an end. What a long, strange…trip.

I'd watch a show where Grayson Allen just keeps missing big shots for an hour.

No more Grayson Allen ever. pic.twitter.com/I5KQlOaEqV

Duke lost. I don't care who you are, where you live, or what team you root for: that's an outcome every American can cheer.

IT'S EVEN BETTER WITH TITANIC MUSIC!!!

Whenever Duke, Pats, and Alabama lose the whole U.S. is happy 😂

Few things in this world please me more than a Duke loss. Especially in the Elite Eight. Thanks, Kansas, on behalf of all of us.

If you didn't pick the right Final Four... you're not alone. pic.twitter.com/R3MTkIyUJ0