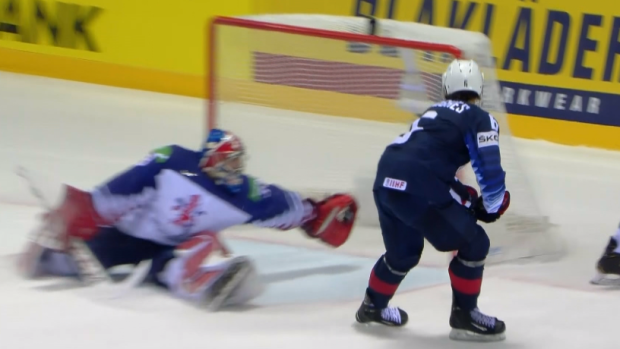 Jack Hughes just turned 18 and he's playing for the United States at the World Hockey Championship in Slovakia.  Hughes is the projected top-pick in the upcoming draft and fans have been watching his games with excitement and anticipation.

Up to this point, though, he hasn't scored a goal and the drought continued on Wednesday against Great Britain thanks to an incredible save from goaltender Ben Bowns.

Ben Bowns absolutely ROBS Jack Hughes of his first goal of the World Hockey Championship. What a save! pic.twitter.com/PwiK27ZFif

What an absolutely phenomenal save!  Hughes was looking at an easy goal for his first of the tournament, but Bowns recovered for the robbery.  The Great Britain goaltender made 59 saves in the loss and was unsurprisingly named player of the game for his team.

Final score: USA 6-3 Great Britain. What a performance from the boys and what unbelievable support from our amazing fans. We ran one of the best teams in the world so close. A night everyone in GB should be very proud.

Ben Bowns @bownsy21 has just been asked about THAT save from Hughes by the New York Times. pic.twitter.com/GJ9fqKvHUt