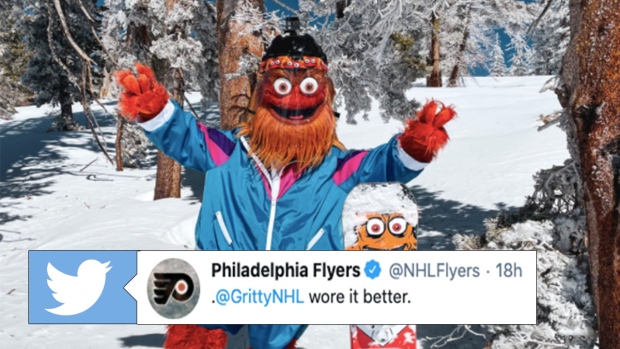 There’s no denying that the Bruins’ David Pastrnak was this year’s NHL Outdoors MVP.

Between the shades, the vibes, the iconic post game interview, and the fact that he scored three times in a 1:39 span to lead the Bruins to a 7-3 victory over the Flyers, this guy should be the new mayor of Lake Tahoe.

David Pastrnak: "We were listening to Barbie Girl before you guys asked me to do media. I was kind of dancing with these glasses out in the locker room then you guys ruined it & I had to go answer questions.

"So I missed the Barbie girl song." pic.twitter.com/OgbiDsbxFx

Pasta for Lake Tahoe MVP is obvious. The close second, though? Gritty, duh.

Not quite Bigfoot,
But still an urban legend. pic.twitter.com/jbBbLJWA9C

Despite being in full vacation mode, he also made sure to troll the Bruins whenever possible.

I don’t start fights, I end them. pic.twitter.com/iymgUQeZHP

Whether or not the Flyers win or lose, Gritty always manages to come out on top.