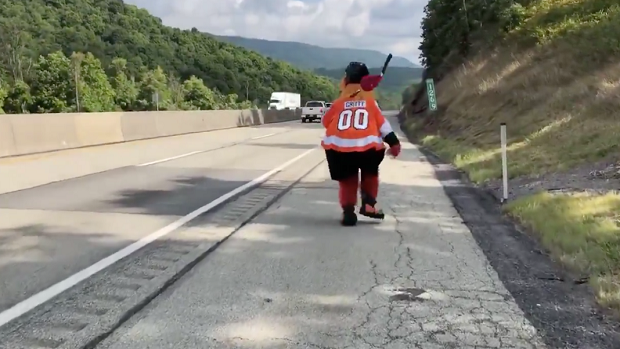 Yesterday, Gritty set sail to Toronto with the goal of reuniting with his beloved Philadelphia Flyers.

Originally, we – and he – thought he was well on his way.

I figured it out, I’m on my way. See you soon, Toronto.

It turned out that Gritty had accidentally gone to Toronto, Ohio, and things went downhill from there.

Gar, plz pick up. I think I’m in Ohio pic.twitter.com/lvntrRAFlQ

Unfortunately, it looks like Gritty had little success in reaching any help to get home, and he’s resorted to hitchhiking home with a hockey  stick hobo bindle.

Poor Gritty. We hope that he makes it home safely, and that he gets to Toronto eventually!