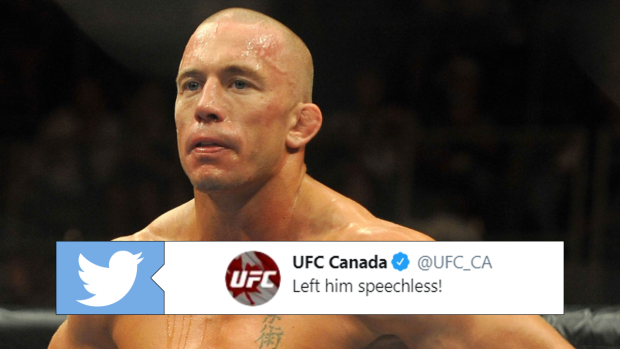 Georges St-Pierre is one of the most beloved UFC fighters all-time due to his unbelievable talent in the octagon, and his dedication to the art outside of it. One of the most polite and respectable fighters to ever compete in the organization, GSP got the recognition he deserves on Saturday when it was announced he would be entering the UFC Hall of Fame.

As has been the case throughout his career, GSP brought a smile to the faces of fans with his pureness upon receiving the call. While the audio is inconveniently hard to make out with so much background noise, even just the look on St-Pierre's face is enough glee to make us all feel good.

GSP getting the news that he’d be entering the UFC HoF is everything. :relaxed::facepunch: . (via Twitter/UFC Canada)

While we aren’t quite sure what the future holds for GSP, right now we’ll just appreciate all he’s done for the sport. One of the most admirable figures in mixed martial arts, Canada is proud to see one of their own be treated to one of the highest honours a UFC fighter can have.

Maybe almost as high as defending his title nine consecutive times, be rated the top welterweight fighter of all-time by Matrix, as well as the most accomplished fighter in MMA history.