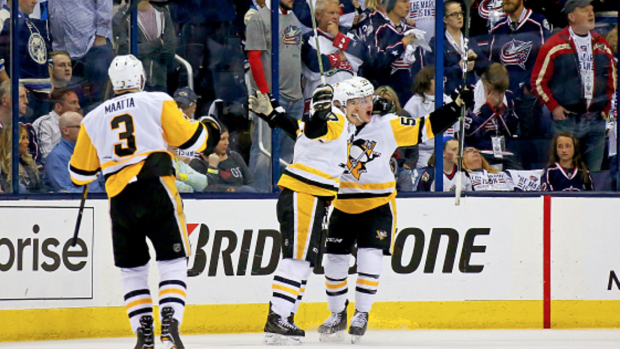 Towards the end of the season, a potential star emerged for the Pittsburgh Penguins.

Jake Guentzel, a 22-year-old 3rd round pick from 2013 recorded 33 points in 40 games after joining the Pens in November.  Guentzel was particularly good down the stretch as he scored five goals in Pittsburgh's last five games of the season.

The success for Guentzel continued in his first two career playoff games as he recorded two points in the second game of the Pens' series against the Blue Jackets.

Sunday night, Guentzel torrid play continued as he recorded a hat trick which included the game-winning goal in overtime to give Pittsburgh a 3-0 series lead.

That’s the first-ever playoff hat trick by a rookie in Penguins history. Nice one, Guentzel! 🐧

Not only did Guentzel become the first rookie in the history of the Penguins franchise to record a playoff hat trick, but he also became the second player in postseason history to do this:

Gerry Plamondon played five seasons in the NHL for the Habs and he scored just nine regular season goals over that span.

In 11 career playoff games, he scored five goals, all coming during the 1948-49 postseason.

Clearly Guentzel is in good company and he's got a bright future.  For those saying the game is a little easier to play on a line with Sidney Crosby, you're not wrong, but you still have to have a ton of your own to make it work.

VICTOR-THREE! GUENTZEL WITH THE HAT TRICK! The #Pens now lead 3-0 in the series.

The defending champs can advance by way of the sweep Tuesday night in Columbus.