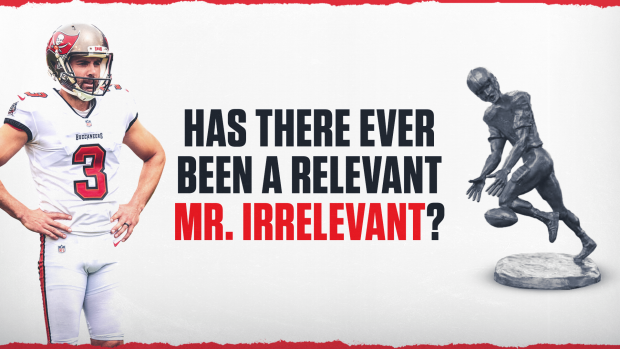 Has there ever been a relevant Mr. Irrelevant?

When thinking of all of the major professional sports league’s drafts, it’s pretty unanimous that the NFL Draft comes out on top as the best.

With moments like Isaiah Wilson’s mom pulling his girlfriend off of him after being draft and booing becoming pretty much a tradition for Jets fans, the Draft is a treat in itself.

But one of the best gifts the Draft has given us is the gift we didn’t know we deserved all along.

Sorry, Trevor, you’re going to have to share the spotlight within this article.

As hundreds of prospects enter the draft yearly, there just has to be someone who ends up going dead last in the seventh round. Thinking of going as the last selection within the draft definitely has some serious “picked last for dodgeball in middle school vibes” and seems like it would be a bummer, but the title actually holds some pretty great value from 1976 on.

A brief little history lesson, former Indianapolis Colts (then Baltimore) and San Francisco 49ers wide receiver Paul Salata coined the “Mr. Irrelevant” title to be given to the last pick within the annual draft. Salata also founded the event called “Irrelevant Week” which is just one long week of celebrating this final draft pick.

Honestly, we’d be pretty happy to be this guy. During this week of festivities, Mr. Irrelevant gets to visit Newport Beach, California, goes to Disneyland, partakes in a golf tournament, a regatta, along with an advice-filled dinner along with the best reward.

A Lowsman Trophy. It’s literally the Heisman, but just with the player having butterfingers and completely goofing the ball.

Though this title appears like a week-long giant roast of you, it’s actually worthwhile to note that there have been some Mr. Irrelevants that have been, in fact, relevant.

As the Buccaneers have the Mr. Irrelevant hot spot at this year’s draft, it’s worth noting that their Super Bowl LV win was not just a Cinderella Story for TB12.

Back in 2009, Ryan Succop was selected in the final sport of the NFL Draft by the Kansas City Chiefs and had a pretty great rookie season with the team when he tied the NFL record for the highest field goal percentage by a rookie in a season.

But the success train doesn’t stop there, after being released by the Chiefs and spending six* years with the Tennessee Titans, Succop ended up signing a one-year deal with the Bucs.

Going 4-for-4 on extra points and 1-for-1 on field-goal attempts, he not only won the Super Bowl with the Bucs but became the first Mr. Irrelevant to start in a Super Bowl game.

Hopefully, this year’s Mr. Irrelevant will have some pretty great success with the Bucs franchise as well.

Being drafted by the Chicago Bears back in 2000, this defensive back has proved that Mr. Irrelevant title wrong. After playing with the Bears for six years, he went on to play with the Seattle Seahawks and Washington before retiring in 2008.

Within his eight-year career, he played within 104 games and completed his NFL journey with 6 sacks, 7 forced fumbles, 21 pass deflections, 4 interceptions, and 350 solo tackles.

Not bad for a guy whose Draft title usually doesn’t live up to expectations.

We’re not sure if it’s the Brady magic in the air, but we have another Mr. Irrelevant that is a Super Bowl champion (XXXVI) and is actually the first to do so.

Drafted by the New England Patriots back in 1994, the linebacker played with the Pats until 1999 when he joined the return of the “new Cleveland Browns.”

Moore ended up coming back to the Pats the following season and would be a part of their Super Bowl-winning squad. Though unfortunately, he would not be able to be crowned what Succops was titled this past year as the first Mr. Irrelevant to both play within and win a Bowl game as he ended up tearing his Achilles Tendon at the start of the season.

Hey, he still gets to live with both a Mr. Irrelevant title and Super Bowl XXXVI winner, so who's really laughing now? Probably still the Patriots, actually.

So we guess our question has been answered, there have been multiple times that Mr. Irrelevant was in fact, quite relevant.

Do you think we’ll see some more success stories for Mr. Irrelevant’s to come? Let us know! ​