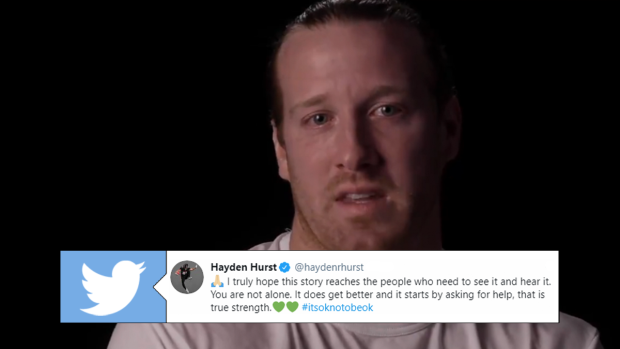 Hayden Hurst made the transition from the Baltimore Ravens to the Atlanta Falcons over the offseason. Whenever a player switches teams, it’s obviously a pretty monumental moment in their life. Saying that, starting over on a new team is nothing compared to the restart he was given earlier in life.

In a series shared by the Falcons, Hurst opens up about his struggles with mental health, substance abuse, and even his attempted suicide. He talks about the importance of his family, the factors that led up to his depression, and how a second chance at life has opened his eyes to the world.

𝗣𝗮𝗿𝘁 1: Hayden Hurst wanted everything to be over. But, he was given a second chance in life. pic.twitter.com/HXJd6JKmrL

𝗣𝗮𝗿𝘁 2: The story of what Hayden Hurst did with his second chance may just save the life of someone close to you. pic.twitter.com/Pvg750bJar

Hurst leaves it all on the table, and will be sporting End the Stigma cleats as part of the My Cause, My Cleats campaign put on by the NFL.

Hurst went viral earlier in the year when he approached Dallas Cowboys quarterback Dak Prescott after their game and commended him for opening up in his own way. As a result of the mic’d up moment, donations started to flood in to Hurst’s suicide prevention foundation in the amount of $8.14. The number was to represent the two player numbers, 81 and 4.

On Sunday, @HaydenrHurst will represent his foundation for #MyCauseMyCleats. Please follow @HHFoundation81 for more information about the foundation.

A mutual respect. @Haydenrhurst and @dak have a tremendous amount of courage. 🤝

Following the video, Hurst was met with wide appreciation for opening up. He shared out a hopeful message, and received all kinds of praise from others in the sports world.

🙏🏼 I truly hope this story reaches the people who need to see it and hear it. You are not alone. It does get better and it starts by asking for help, that is true strength.💚💚 #itsoknotobeok https://t.co/OY0ZuX5Tog

@haydenrhurst Man...this hit close. You are an inspiration. Saving lives by sharing your truth. Stronger than ever my friend!! https://t.co/DJMbKFT2SR

You’re the trailblazer man! You coming out with your story a few years ago gave me the confidence to finally share the entirety of mine. Appreciate you more than you know 🙏🏼💚

Wow Inspirational. Proud to be your teammate brother and appreciate what you are doing for this world 🙏🏿 #Godsend @haydenrhurst https://t.co/SL91UsLdPk

Thanks my man..hoping to make a difference 🙏🏼

It’s okay to not be okay. The stigma around mental health being weakness has to go.