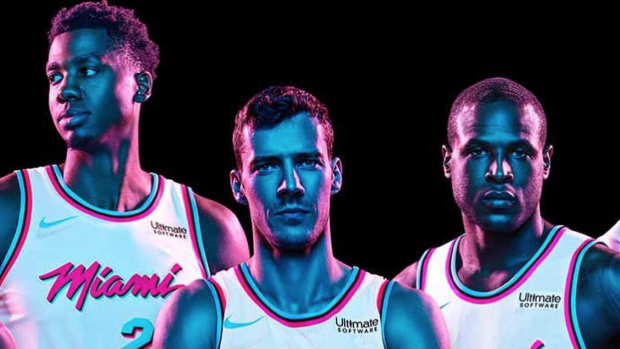 All season long in the NBA, 'City Edition' jerseys have been leaked and officially unveiled and from what we've seen, they're all unique and (for the most part) awesome.

The #Raptors fourth jersey has leaked. Thoughts on their "City" jersey?

With so much creativity going into each and every jersey, the question has to be asked, which one is the best?

Before Tuesday, that question may have been a tough one to answer, the Miami Heat made it easy by dropping their incredible Miami Vice-themed jerseys.

Miami picked a winner with this jersey and by doing so, they set the internet on fire.

So the @MiamiHEAT released those Miami Vice jerseys. 🔥 pic.twitter.com/b6PXUH5uQB

These Miami Vice Heat jerseys are so fire they just might get LeBron to come back to South Beach. pic.twitter.com/wrKulTeUas

I need a Miami Vice Jersey 🔥

Im copping a Miami vice jersey ASAP! I wonder what they’re going to do with the court 👀

Miami really waited for the big three to bounce to drop the dopest jersey of all time which could only mean one of two things either miami vice is making a comeback and I can start wearing white suits or this how they’re planning to dress during the Amazon pitch meeting pic.twitter.com/F1L5ax0Cyh

I high-key want to buy a Miami Vice jersey. Those are 🔥

Get me a Dion waiters Miami vice jersey

The new @MiamiHEAT city edition unis are the best unis in the NBA this season. Don't @ with me. pic.twitter.com/g6XVihcIBw

Yo these Miami Heat city edition jerseys are 🔥🔥🔥🔥 https://t.co/Hes3el2btG

Do you agree with the consensus that these are the best jerseys in basketball?  Let us know by tweeting us @BarDown.