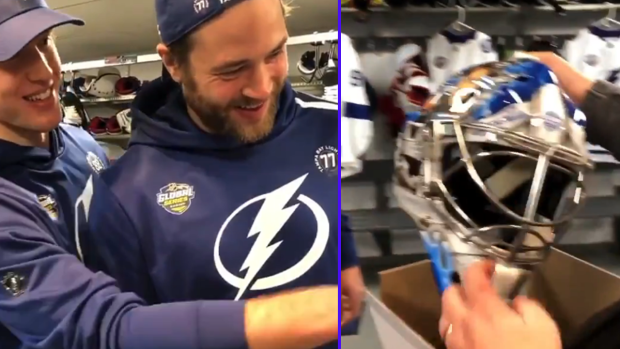 The Tampa Bay Lightning are getting ready to show their stuff in Sweden with a back to back against the Buffalo Sabres. With players like Victor Hedman, Rasmus Dahlin, Johan Larsson, Marchus Johansson, and Victor Olofsson all hailing from the land of the meatballs, it makes sense that these teams would star.

When you’re showcasing to the rest of the world, you’ve got to look your best. This may be why Andrei Vasilevskiy received a new mask, which hilariously features an illustration of himself and Victor Hedman all dressed up. Is it a play on Halloween, or just a Swedish twist to the mask? We don’t care, we love it… and so do they.

Vasilevskiy's new mask for the Bolts' Sweden games has pictures of him as a pirate and Hedman as a viking on it pic.twitter.com/rjuxp4jaeQ

Hedman has no problem taking full credit for the idea, and why wouldn’t you. It’s incredible.

The two teams are set to square off at 2pm ET from Sweden, so hopefully Vasy will be dawning his new headgear for that. If not, maybe we’ll see Hedman slip it on.