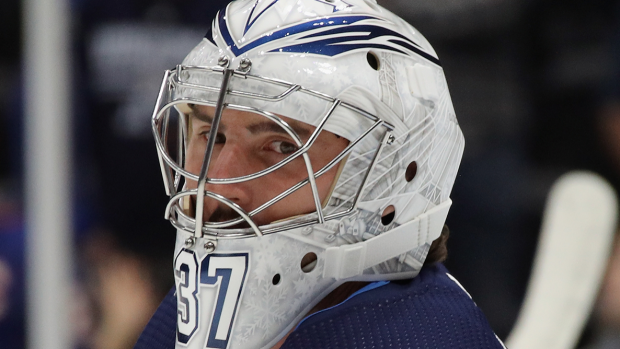 Monday night, Connor Hellebuyck of the Winnipeg Jets finally got to debut his new mask in Winnipeg's game against the Penguins.

The mask was ready to go for the start of the season, but Hellebuyck wasn't able to debut it due to some unlucky and unfortunate circumstances such as the first mask being lost or stolen.  Jets TV reported Jamie Thomas highlighted the crazy story which ultimately had a happy ending.

Connor Hellebuyck will debut his new mask in PIT. Crazy story, first mask lost/stolen. Another mask made/repainted, shipped overnight to NYC Oct. 2 with hope it would arrive for season opener. Held up by customs, missed flight and didn't arrive in NYC until Oct. 4. Driven to NJ.

Other fun facts about this saga:
1. The first mask was last seen on Friday the 13th of September.
2. Wildlife Department got involved at customs, no reason was given.
3. During delivery of the 2nd mask, drivers truck broke down another driver had to take all the deliveries.

The new mask came with some good fortunes, too, as Hellebuyck won his first game of the season in a 37-save effort against the Penguins.