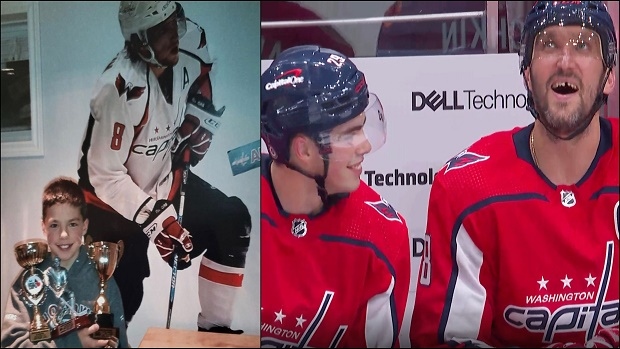 Every young hockey player dreams of playing in the NHL one day, whether it’s for their favourite team or not, so when the Washington Capitals selected Hendrix Lapierre with the 22nd overall pick in the 2020 NHL Entry Draft they instantly turned more than one of his dreams into reality.

Lapierre was born in Gatineau, Quebec, but he grew up a massive Alex Ovechkin fan, so getting drafted by the Caps meant there was a possibility he would someday play alongside his childhood hero. Well, it didn’t take very long for that to happen as Lapierre made his NHL debut on Wednesday night and got to play with his favourite player.

Hendrix Lapierre has become the first forward to make his NHL debut for the Capitals at the age of 19 since Andre Burakovsky in the 2014-15 season.

Not only did Lapierre make his NHL debut on Wednesday night and got to play alongside Ovi, but he also scored his first career NHL goal with his family in attendance to witness the moment.

LAPPY WELCOME TO THE NHL YOU BEAUTY pic.twitter.com/PjiX5qkm5P

AND THE FAM'S ALL HERE 😍 pic.twitter.com/DFZWmxyHB4

The only thing that would have made the moment that much sweeter would have been if Ovechkin set up the goal, but he probably doesn’t care who set it up and is just stoked to get on the board at the highest level.