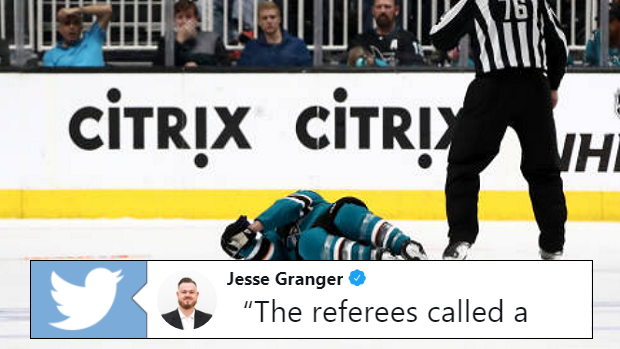 Joe Pavelski lays on the ice after getting knocked to the ground in Game 7. , Ezra Shaw/Getty Images

Tuesday night was a wild one in San Jose.

The course of Game 7 between the Vegas Golden Knights and San Jose Sharks was completely altered after the most controversial call of the NHL season took place. With a 3-0 lead in the third period, Vegas forward Cody Eakin was awarded a 5 minute cross-checking major on Sharks forward Joe Pavelski off the faceoff and it had lasting results. The Sharks unthinkably went on to score FOUR goals in just over four minutes and eventually clinched the series in overtime off of a sweet move by Barclay Goodrow. Fans were livid with the call after the game so to clear the air, the series supervisor Don Van Massenhoven offered an explanation on why the call was made.

Here is the explanation of the penalty on Cody Eakin from series supervisor Don vanMassenhoven:

“The referees called a crosschecking penalty for an infraction that caused a significant injury. In their judgment, the infraction and its result merited a major penalty.”

Upon review, the brunt of contact appeared to come when Paul Stastny accidentally (at least that’s what it looked like) collided with Pavelski following the cross-check. Pavelski’s head was seen bleeding and he was forced to leave the game.

"Random and accidental." Take no notice of Stastny's knee under the legs and arm shoving Pavelski down. lol It was dirty. Stastny should have gotten the penalty, but either way it's a major in my eyes. pic.twitter.com/4yaua80He6

Golden Knights forward Jonathan Marchessault was furious after the play and didn’t hold back in his post-game comments. He couldn’t quite fathom how the refs came to their conclusion…

Do you agree with #Marchessault’s take on the 5-minute major called against #Vegas in Game 7? 🤔

And then there was former NHLer Beau Bennett, who shared, well, an interesting opinion of his own.

Gnarliest game I’ve ever seen. No way you can call a major penalty just because someone gets hurt though. I should know because I would have drawn 50 of them. #BecauseItsTheCup

What’s done is done, but it’s pretty apparent that this one will be spoken about for a long, long time.