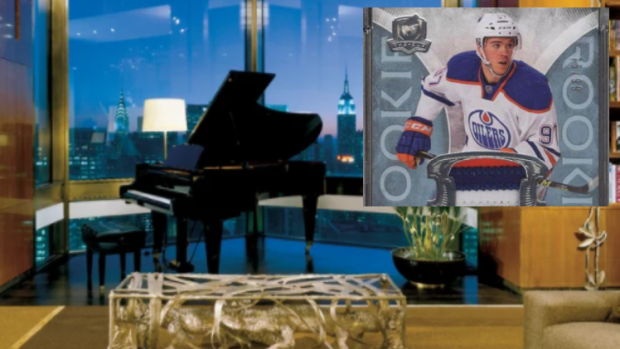 Connor McDavid is shaking up the NHL to the point where people are willing to drop a ton of money just to claim a little piece of his history. We’re talking about the record-breaking auction sale that saw a Connor McDavid rookie card, complete with an autograph and piece of his game-worn jersey, sell for a whopping $55,655 US (72,215.15 CAD). That’s a lot of chedda, so we decided to compile a list of things you could buy instead of that rookie card. You know, since all of us have a cool $50K to spend. Right?

Purchases range from event tickets, to trips, to other kinds of memorabilia, and all of it would be pretty far out of the question for most of us. But here we are, dreaming!

This price would obviously change by the year, and by the vendor, but according to Sporting News the most expensive tickets you could buy from NFL Exchange are $40K. If you’re buying off SeatGeek, you’re looking at $55K.

This price includes transportation, accommodation, food, and entertainment. The estimation is made by AirTreks, and it is acknowledged that these prices would heavily vary depending on where exactly you go and what you do. Overall though, it is believed you could do a year-long trip around the world twice for around the price of Connor McDavid’s rookie card.

You can rent a private jet for the day (prices vary):

Who hasn’t dreamed of owning a private jet? While, for the price of Connor McDavid’s rookie card, you could get one for the day! Prices vary, but even the most expensive plane off of pentastaraviation.com – which is excitedly named the “Ultra Long Range” jet – is $7,000-$9,000 per hour (meaning you could get it for at least six hours).

Yup. With the amount of money dropped on the Connie card, you could forget about cooking your own food for a whole year. According to the Globe and Mail, the average personal chef works for $35,000-$45,000/year.

You could buy property on an uninhabited island off the East coast of Canada ($21,944.76):

Yup. You could own a small piece of cardboard, or you could own this 1.14 acre undeveloped island property off the shore of Nova Scotia.

This looks like it would be fun, doesn’t it? But would it be as fun as a Connor McDavid rookie card? Depends who you ask, I guess.

You can spend a night in one of the most expensive hotel rooms in the world – the Four Seasons in New York City ($50,000):

Pretty specific customizations, and these babies sold for a whopping $55,000. Just $655 shy of the record-breaking rookie card.

Well, now that we all feel a little bit worse about ourselves, let's just enjoy watching the card increase in value as McDavid continues to drop jaws on the ice.