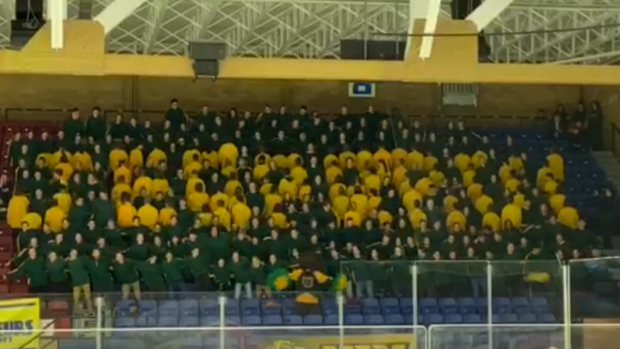 Forget the wave, that’s so basic and overdone. We’ve evolved as humans, as fans, as creative audience members with something big to prove. We no longer simply “Wave”, now we “Game Show”.

Or at least St. Joseph-Scollard Hall High School does.

On Sunday, a video emerged from the East-West Hockey and Spirit event in North Bay. It featured members of the school putting on an impressive game show-themed performance while sitting rinkside.

This "Game Show-themed" performance from @SJSHSAC at the East-West Hockey and Spirit event in North Bay is too good 😅 pic.twitter.com/Puonipnh12

Not bad, and the tribute to Alex Trebek was a nice touch!

Do you have videos like this? Send them to @BarDown!

This is so cool