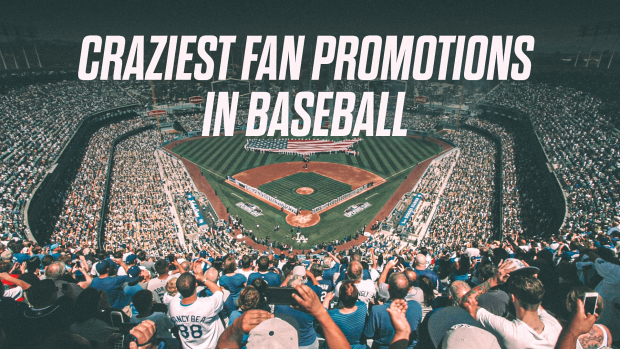 Highlighting some of the craziest fan promotions in baseball history

If you’re North of the Border like us, then we know you are absolutely itching to get back to live sports again.

Everything about the fan experience seems like a distant dream. Walking into the arena with 1000’s of other people, eating your favourite concession food, high-fiving random people, seeing your favourite athletes perform in front of your very eyes.

But we feel like there’s one thing that we completely forgot about.

Trying to be one of the first of many fans to enter the ballpark upwards to two hours even before the pitch is something we totally forgot about but would love to do more than anything right now. We’d do crazy things just to go back!

So why not look at some of the craziest fan promotions in baseball? There’s shockingly A LOT.

Now this promotion has to be our favourite and sits at the Minor League level. The Fort Myers Miracle-Minnesota Twins affiliate decided to pay homage to George Constanza and dedicate an entire night to the character. If you remember season 5 of Seinfeld, Costanza spent an entire episode doing the opposite of what he typically does.

So the crew in Fort Myers decided to play on his episode and have a completely backwards night.

Fans were paid to park their cars, the home team wore road jerseys as the away team wore their homes, the better seats were sold for less than the nosebleeds, the women’s and men’s bathrooms were switched, the game started in the ninth inning, but that’s not even the best of it.

After the game, players even asked the fans for their autographs.

This night sounds amazing and we hope we catch the invite the next time it happens!

We feel almost weird to say that the weirdest thing the Hagerstown Suns baseball team gave away in promotion was not a kitchen sink. Really, you’d think the line would be drawn on absolutely crazy promotions but nope, they truly went out of the box for this one.

Back in 2003, the Suns held a Free Funeral Giveaway which gave a fan their entire funeral arrangements.

Honestly, you need to respect the Suns for allowing this very unlucky fan to not have to think about their funeral ever again.

And though it definitely must not have been all sunshine for this fan, this promotion alone showcases just some of the hilarious promotions minor league teams put on.

No this isn’t your typical college bar promotional night, this is actually something that took place in Cleveland during their game against the Texas Rangers back in 1974.

Of course one of the main things sports teams want is to attract more fans to the game, so the crew in Cleveland decided to offer their beers at a discounted price, with a six-beer limit during purchases.

Though here’s where things get sticky.

There was no limit on how many purchases a person could make, so you can just imagine the mess that was created.

The best part is that they even held a similar night a month later just with tighter restrictions.

If the screaming children from Cleveland’s ten-cent beer night weren’t enough, then the Brooklyn Cyclones have you covered in one of the strangest events we’ve ever heard of.

Selling pregnancy-craving foods, pregnant mothers were encouraged to join in on the seventh-inning stretch and sing Take Me Out to the Ballgame, and it gets even better.

If a mother gave birth before the game ended, the Cyclones gave season tickets to the family.

This entire promotion was just pure revenge at a local radio station in Chicago that had fired well-known DJ Steve Dahl as they transitioned from rock to disco music.

On July 12th, 1979, rock fans were encouraged to bring their disco records to the ballpark to burn and destroy them. The White Sox teamed up with local rock station 97.9 and used the opportunity to charge people just 98 cents to enter Comiskey Park in exchange for their unwanted disco records.

During the sold-out doubleheader against the Detroit Tigers, people even snuck into the game just to attend this event and went past the building capacity. Records that were supposed to be collected and burned at centerfield were now being tossed in from the stands and riots were breaking out on the field by thousands of fans.

Fans even started their own fires on the field and damaged team equipment, leading for the White Sox to forfeit their second game against the Tigers.

This has to be not only the weirdest but the worst of all time, winning the WOAT title on this list.