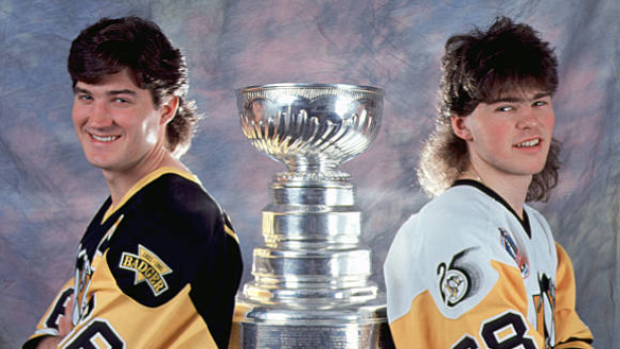 Jaromir Jagr is the owner of all kinds of long, long streaks. That’s what happens when you play for, like, 100 years.

Okay, so his career actually spanned from his rookie season of 1990-91 until 2017-18, with a few years overseas in between. That’s still a ridiculously long time to play top level hockey, and unlike some other longtime NHLers, he did it with a ton of different teams.

Jagr played for *takes a deep breath* the Penguins, Capitals, Rangers, Flyers, Stars, Bruins, Devils, Panthers, and Flames. We don’t have the exact number for how many teammates Jagr has had in his career, but thanks to u/ridingmissdaisy we have a pretty entertaining streak to do with his teammates.

The Reddit user compiled a long list of names, one from each Stanley Cup winning team since 1980 with the exception of 1986. Each name on the list played at SOME point with Jagr, even if it were just for a couple games, and for the missing year Joe Muller is used as a now-former teammate on the losing team.

As for the current day Stanley Cup Playoffs, the Dallas Stars moved onto the Final with former Jagr teammates Tyler Seguin, Jamie Benn, and Anton Khudobin leading the way. Of course, it wouldn’t have mattered for the Final streak, seeing as Jonathan Marchessault of the eliminated Vegas Golden Knights also played with Jagr in Florida.

On the other side, Andy Greene is a former Jagr teammate and now plays for the New York Islanders, while Braydon Coburn of the Tampa Bay Lightning also enjoyed a stint with Jagr.

In other words, the streak wasn’t really in danger, but it’s still absolutely hilarious the one-degree of separation Jaromir Jagr has with Stanley Cup Champions each year.