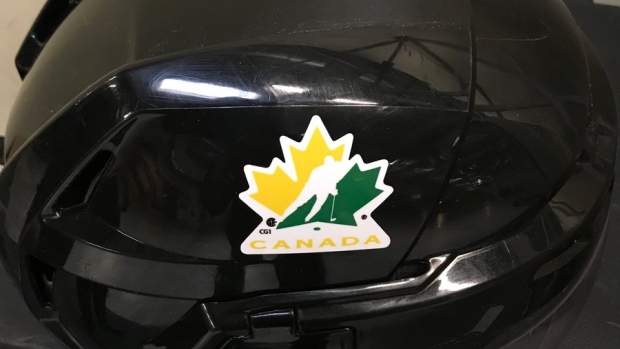 It’s been 22 days since the Humbolt Broncos’ bus tragedy that killed 16 people and injured an additional 13, and the hockey world continues to show their support for the victims and their families.

With the upcoming IIHF World Championships set to commence next week, Hockey Canada will honour the Broncos with a special yellow and green Hockey Canada sticker for the players to wear on their helmets.

For you, we play on. #HumboldtStrong pic.twitter.com/d2uR8xLU55

The team took the ice for their first cohesive practice as a team on Saturday.

Although it’s early and players like Pierre-Luc Dubois have yet to skate after his Blue Jackets were eliminated by the Capitals in the first round of the Stanley Cup Playoffs, here’s how head coach Bill Peters and his coaching staff have assembled the lines so far.

(Dubois not here yet)

You'll notice that there's three Oilers on the team, and if not for a few deals with the Islanders that sent Griffin Reinhart and Jordan Eberle to Long Island, there could've been a few more present like Barzal, who was drafted with the first round pick the Oilers traded in the Reinhart deal. The Islanders flipped the second round pick they acquired in that trade to move back into the first round and grab Beauvillier.

With the amount of centres on the team, Sabres middleman Ryan O'Reilly has shifted to the left side, while future Canucks captain Bo Horvat is slated to centre a fourth line with Blue Jackets centre  Pierre-Luc Dubois.

After the practice, the Canadians were able to meet some of the Canadian military stationed in Riga, Latvia, which is where they’re practicing before heading off to Denmark.

Some members of team Canada saying hello to some of Canada’s finest stationed in Riga. pic.twitter.com/cJ7edJECzP

The Canadians are looking for their third gold-medal in the last four years at the tournament after falling to the Swedes last year in the gold-medal match.

Canada will face the Americans in their first game on Friday, May 4th. You'll be able to watch the IIHF World Championship games live on the TSN network and streamed online on TSN GO.