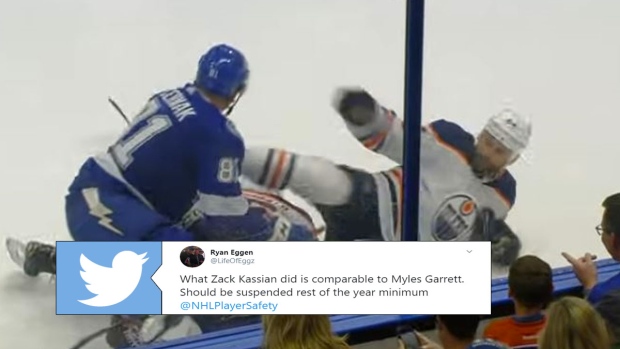 The Edmonton Oilers are probably going to be without Zack Kassian for quite a bit of time after Thursday night’s game.

With just over two minutes left to go in the first period of the Oilers’ game against the Tampa Bay Lightning, Zack Kassian and Erik Cernak got tangled up around the blue line. Before getting up to his feet, Kassian gave Cernak a kick to the chest. 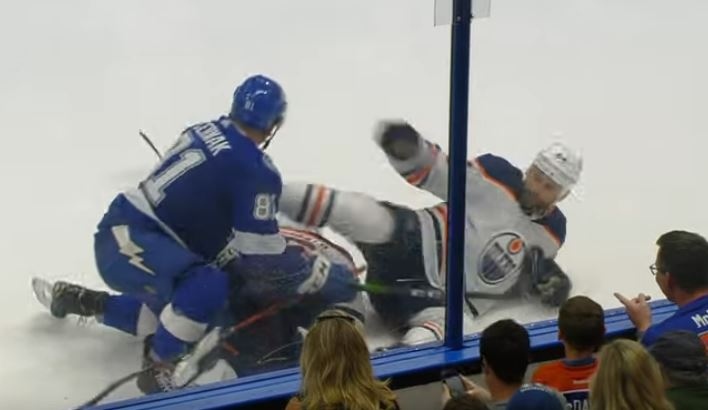 Kassian was not issued a penalty on the play, even with an official standing a few feet away, and hockey fans everywhere shared their thoughts on the dirty play.

I know where Zack Kassian is getting his ideas pic.twitter.com/bPWm5V2kl0

Zack Kassian for some reason: pic.twitter.com/7oppKdWBMe

Zack Kassian is going to be sitting for a while. #Oilers

Chris Pronger was suspended eight games for stomping on the leg of Ryan Kesler in 2008. Zack Kassian kicking a player in the chest in 2020? That's gotta be at least 10 games.

Zack Kassian should be suspended for the whole season. #LetsGoOilers

Zack Kassian is going to be in trouble with George Parros tomorrow. Bet his road trip is done.

What Zack Kassian did is comparable to Myles Garrett. Should be suspended rest of the year minimum @NHLPlayerSafety

How many games do you think Kassian will get for this?​