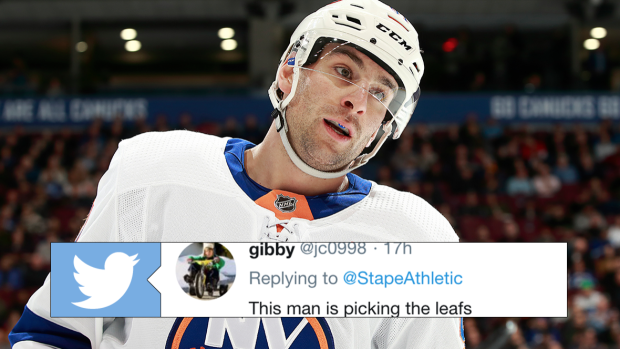 #TavaresWatch has been in full swing since the season ended and the watch has heated up this week as the pending UFA met with potential suitors and now has a huge decision to make that will impact every team he's met with.

When big names are making a big decision like this, every little detail gets blow out of proportion and the latest of those details is about where Tavares went from Los Angeles after meeting with teams.

John Tavares is on his way home from L.A., so no chance for another face to face with Lamoriello. Wouldn’t expect to hear anything on a decision today. #TavaresWatch

Tavares went home to Toronto, by the way. That’s his home. He doesn’t spend much time on LI during the offseason.

Tavares being from Toronto has already been played up enough, but fans are either panicking more calling the #TavaresWatch in response to this tweet:

Every isles fan.... including me RN pic.twitter.com/PwRYSvzcxw

His cause gonna pull up in front of his parents house to a shitload of waiting media and he's gonna realize he doesn't want that in his life.

Tavares flying back to Toronto doesn't mean he's signing with the Leafs.  That's not to say he won't sign with them, but if he does, it won't have anything to do with him flying home.