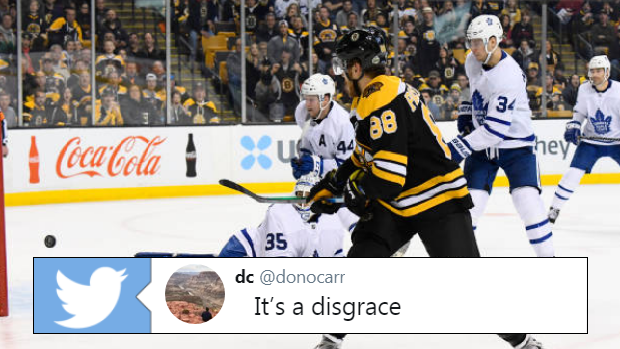 For years, players have been applying tape to their blades in various ways.

Some skaters choose to keep it simple with more of a traditional look, while others like to dress their entire blade with it. Boston Bruins forward David Pastrnak used a tape job last night that might lead some fans scratching their head.  For whatever reason, the Czech native went all over the place and scribbled his blade with black tape.

So impressive that Pastrnak was able to record 5 points in one playoff game despite having the most disgusting, embarrassing, piece of garbage tape job in the history of organized hockey. pic.twitter.com/T5PeSH3ID2

Uh… What on earth is that? Hockey fans were quite confused with the odd job.

I have no clue what to believe anymore. The lies I must have been told growing up through the system. I'll never tape another blade in my life.

Lol just heated about that tape. It’s a rough job tho

It’s tough to argue with anything Pastrnak did last night, considering he managed to become the youngest player in NHL history to record six points in a playoff game. His three goals and three assists helped lead the Bruins to a convincing Game 3 win over the Toronto Maple Leafs.

Pastrnak isn’t the only NHLer who chooses to hit the ice with an unconventional looking blade. Various players around the league have their own style that are truly unique in their own way.

Heck, some players even do things differently on the other side of their stick, too.

Who has the best tape job in the NHL? 🤔🤔

As ugly as it is, at least Pastrnak rocked black tape so it didn't stand out as much to fans.

Is this the weirdest one in the NHL?