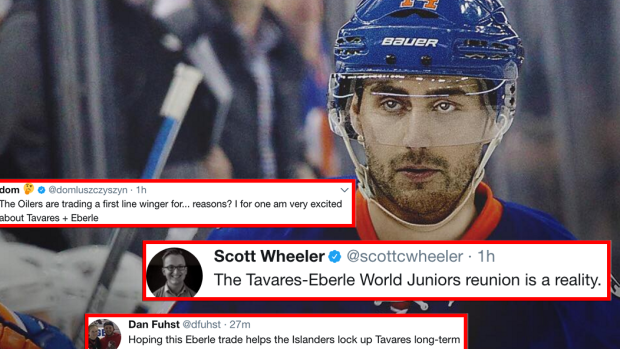 The hockey world expected some action on Thursday once the trade freeze was lifted and some teams delivered.

BREAKING: The #Islanders have acquired #JordanEberle from the #Oilers for #RyanStrome. Thoughts?

After weeks of rumours, Jordan Eberle was finally traded.  The 27-year-old is off to Long Island while Ryan Strome (23-years-old) comes back the other way.

The move could be a nice change of scenery for both players, and for Eberle, he'll be reunited with John Tavares which should be exciting for fans to watch.

Right and a great opportunity for Jordan Eberle to hit the restart button as well. Good deal for both. https://t.co/lbKHZWUHDx

Eberle:"I'm super excited to be a part of the Islanders organization. Also grateful for the chance the Oilers gave me coming into the NHL."

The Tavares-Eberle World Juniors reunion is a reality.

Eberle's 51-point season, considered a massive disappointment, would have been a career-best for Strome. https://t.co/XP4KNJUY4O

The Oilers are trading a first line winger for... reasons? I for one am very excited about Tavares + Eberle pic.twitter.com/qxK8JN3VXL

Snow: "Lol okay give us Eberle"

Peter Chiarelli has now traded Tyler Seguin, Taylor Hall, and Jordan Eberle for a whole lot of nothing.

Strome for Eberle is a very fair deal. Eberle and Tavares have a history of success/chemistry internationally.

TSN REWIND: With Eberle joining Tavares with the Isles, re-live the memorable goal they connected on at the 2009 WJC https://t.co/VTXa9YqeMC pic.twitter.com/3gnUbIgUyM

Eberle and Tavares together is going to be so sick. The islanders just got better

So that Eberle trade... pic.twitter.com/uRKJVfRfbD

Strome for Eberle... Feel like both teams kinda went sideways here, with the slight advantage to NYI. Tavares & Eberle should be interesting

"Eberle sucks!" Eberle is traded. "How come Chiarelli couldn't get more for a player who sucks??" Chiarelli did very well with this trade. https://t.co/WuFcgQAxW1

Would have much preferred Eberle for a defenceman. We'll see how this plays out, Strome hopefully finds some chemistry with Connor. #Oilers

Another good trade by Chiarelli. No room or time for $6million Jordan Eberle. Excited about the potential of Strome plus the huge $ savings

Jordan Eberle for Ryan Strome? Are the Oilers serious? 😂

Also, it's so hard to get 30 goal scorers, it amazes me how Gm's trade them for 50 cents on the dollar. Watch Eberle and Tavares tear it up😎

Another terrible trade by Charelli. Eberle had 51 points last year which is career high for strome Cap related doesnt make it a good trade😅

Everyone thought the Hall trade was the worst thing EDM could have done & it turned out great.
Feeling optimistic about the Eberle trade

Another L for Peter Chiarelli, and Jordan Eberle is a New York Islander. pic.twitter.com/l62qYHmlla

it helps financially but hurts my heart