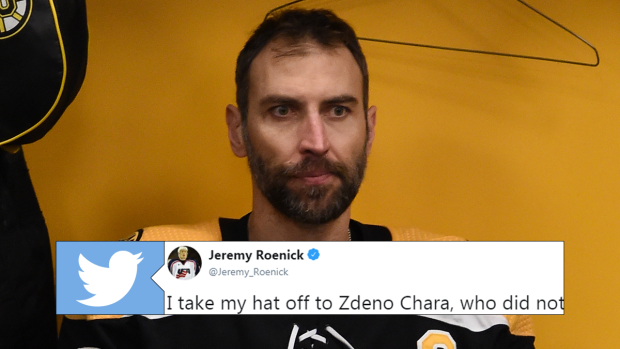 The Boston Bruins swept their way to the Stanley Cup Final and they closed out the series without their captain on the ice… well, he wasn’t on the ice during the game.

Zdeno Chara was ruled out of game four right before the game started, which was a surprise to many. There wasn’t any moment in particular that stands out as the moment he was injured, so it was rather curious. Bruins coach Bruce Cassidy said he is expected to be ready for the Stanley Cup, but he was ready for more than that.

He was ready for the post-game celebration.

What an moment. He missed Game 4, but Zdeno Chara comes out in full uniform to celebrate the Eastern Conference championship with the @NHLBruins. #StanleyCup pic.twitter.com/5J6aVEnkEk

The thought of Chara sitting in the locker room in full gear just sitting on a folding chair watching the game is laugh out loud funny.

Chara, who didn't play, is in full gear celebrating with his teammates at the buzzer #bruins

Chara watching this game in full gear is UNREAL pic.twitter.com/t9qXg1a1OK

Chara on the ice with uniform on to celebrate pic.twitter.com/BJA2tQjJKZ

I take my hat off to Zdeno Chara, who did not dress game 4 due to injury. He got dressed in full gear at the end of the game to celebrate with his teammates on the ice. That’s a true captain right there! First class leader. #BigZ

Just in case you were wondering, he got out there to accept the trophy and chose not to touch it.

I thought it was great, and also a little funny, that, after sitting out tonight with an unspecified injury, Zdeno Chara got into full uniform to accept - and not touch -- the Prince of Wales Trophy.