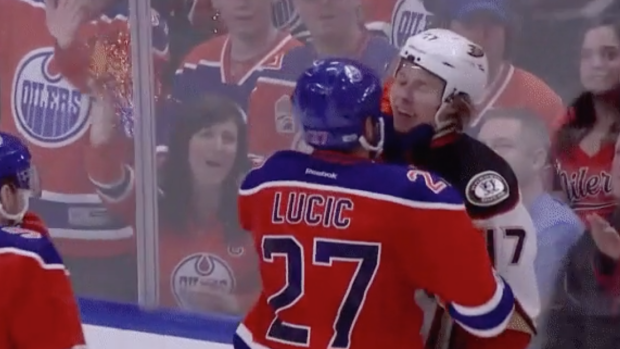 Playoff hockey is as rough, tough and intense as ever, and sometimes, emotions do get the best of players.

Milan Lucic of the Edmonton Oilers is one of those players that plays a physical game and knows what it takes to win in the playoffs.

He also isn't afraid to defend his teammates, which he showed during Game 3 against the Ducks Sunday night.

In the second period, Hampus Lindholm shoved superstar Connor McDavid, and Lucic responded by doing this to Lindholm:

Lucic and Lindholm were both penalized for roughing on the play, but that didn't stop hockey fans from weighing on what they saw, which appeared to be a choke from Lucic.

@JonathanWillis At least Lucic had a bit of a choke hold and some grinding tonight. Eberle never bothers. pic.twitter.com/HY5Yrm3fRY

Did @NHLPlayerSafety completely miss Lucic literally grab Lindholm by the throat and choke him last night?

@bigmouthsports Lesson to be learned: if you mess with Connor McDavid, Lucic will choke you and then McDavid will score.

So now I'm interested if Lucic gets a hearing from @NHLPlayerSafety for that 3rd degree felony assault on Lindholm.

Still trying to figure out why it was 4 on 4. Fine, call roughing on Lindholm, but Lucic deserved extra for that chokehold.

What a joke. Lucic grabs Lindholm by the throat and its 4 on 4.

Lucic grabs Lindholm by the throat, Lindholm also gets called for roughing. These refs are a joke.

Lucic grabs Lindholm by the neck, throes a punch, and they both get penalized🤔

Of course those are offsetting penalties because #Lucic only put his hand on #Lindholm's throat and then punched him.

Lucic grabbed Lindholm by the throat & his entire life flashed before his eyes. #StanleyCup

Lucic's past coupled with what he did to Lindholm makes it easy to understand why so many were outraged with the 'choke.'

At the end of the day, though, if the NHL does nothing about it, then it's a footnote on what could be a 2-2 series after Wednesday night as Lindholm (+5 for the game) and the Ducks won Game 3.

FINAL: Jakob #Silfverberg's three points lead the #Ducks back into their series against the #Oilers.