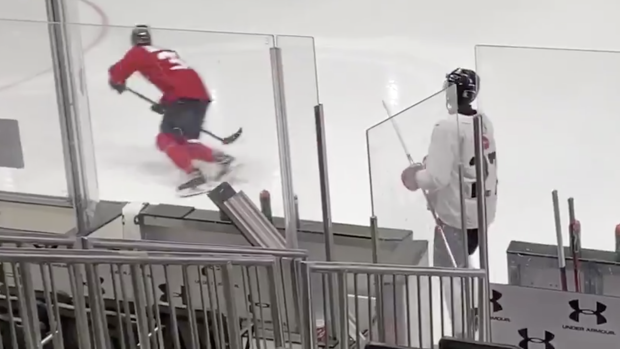 Thursday, Kirby Dach and Dylan Cozens showed up late for a skate at Canada's World Juniors selection camp and not only did they own their mistake, but did so by showing a tremendous amount of leadership.

Kirby Dach and Dylan Cousins did not skate with their group this morning. They showed up to the 11:30 skate right at 11:30 as coach Tourigny had gathered the group to get started. He had a chat with both guys, fist bumped both, but had them leave. They watched from the stands pic.twitter.com/DDEwozbV42

Tourigny clarified that Dach and Cozens had treatment, and that’s the main reason they were behind, but stresses there needs to be communication about these things. Reiterated that they made the choice to take the hit and leave, rather than allow rules to be loosened for them.

Friday, the two continued to set a great leadership example and were early for their skate.

Kirby Dach and Dylan Cozens first ones on the ice for late session. “Why are you guys so early?” Asked Jason Labarbera with a smile. “Not taking any chances” said Cozens. pic.twitter.com/OQqqihHOXB

As the old saying goes, you live and you learn.  Everyone makes mistakes, but not making the same mistake twice and growing from it is always the correct response.  Dach and Cozens will be key contributors for Canada at the World Juniors on the ice and as leaders.

Tic-Dach-Toe@kdach77 opening up his bag of tricks! 🧙‍♂️ #WorldJuniors pic.twitter.com/kKHhHvBaQS