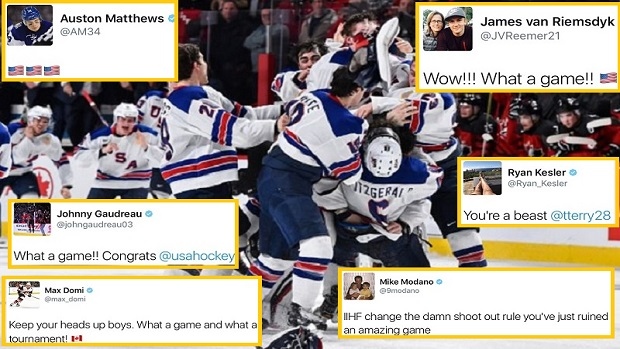 The 2017 IIHF World Juniors Hockey Championship gold medal game between Team Canada and the United States was one that is going to be remembered by hockey fans for a very long time. The two teams went back and forth all game long, with a lot of the excitement taking place in the third period as the two teams combined for four goals in less than six minutes to open up the period.

The two teams couldn’t decide on a winner through regulation, so they needed the extra frame to find the gold medalist. However, nothing was decided in overtime, so they went to the shootout and that’s where the US sealed the deal.

Tyler Parsons makes the golden save in the shootout as USA tops Canada to win Gold. #WorldJuniors

With the victory, USA earned their fourth gold medal in World Juniors history and their first since 2013.

The USA outlasts Canada in a shootout for an epic 5-4 victory to win the #WorldJuniors gold medal. pic.twitter.com/GOfwSo13pz

Incredible performance by both sides, everyone can leave proud of their efforts! Good luck in your careers gentlemen! 🇺🇸🇨🇦 #WorldJuniors

Shooting strictly five hole for the rest of the season.

@AM34 I'm tired of you patriotic bs Auston

What a game!! Congrats @usahockey

Congrats to @usahockey on winning the #WorldJuniors! pic.twitter.com/pV04lxzqfz

However, even though the US won the game, certain American fans were not pleased with how it all ended.

What a game. Shit way to end it. Well done by Canada. It was a pleasure to watch this game. Instant classic.

Despite losing the gold medal, fans were very happy with their team’s performance.

Keep your heads up boys. What a game and what a tournament! 🇨🇦

Great effort by the @HockeyCanada boys. Be proud🇨🇦

My son is in tears and I'm fighting them back... ridiculous. Congrats to both #USA and #CAN for such an amazing display on the ice

Those kids did 🇨🇦 proud tonight. No shame in losing in a skills competition. Congrats to Team USA on the comeback win.

Je pense pour toi Nicolas Roy... When you score in the Stanley Cup Final down the road, tonight will be a distant memory. #WJC2017

Congrats to both teams on one extremely entertaining game / tournament.#WorldJuniors pic.twitter.com/kh1lCeleMj

On behalf of all fans, let me just say thank you to all the world class athletes in this game. You should be very proud #WorldJuniors

Wow, that was a great hockey game! Such heart & skill, so close I could barely watch. Congrats to Canada for the silver, USA for the gold!

Wow!! I know it wasn't the result we wanted but thank you 🇨🇦🇺🇸... that was epic!! #WorldJuniors

Tough loss tonight but @HC_Men gave it their all, congratulations on a solid run #WorldJuniors

Congrats to all the @HockeyCanada players/coaches on an amazing World Junior tournament. You did Canada proud.

Hopefully these two have another epic showdown at next year's tournament in Buffalo.