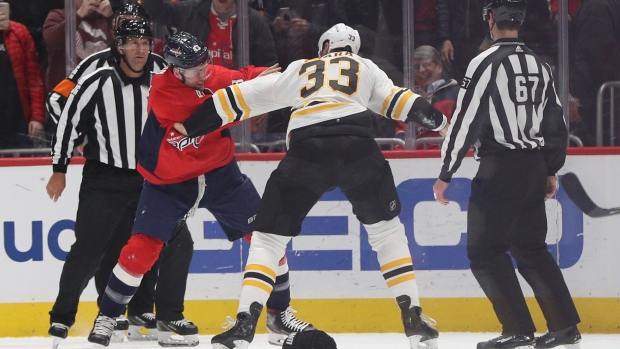 Two of the NHL's biggest and baddest antagonists squared off in a heavyweight matchup on Wednesday.

The tallest hockey player to ever suit up skates standing 6'10", Zdeno Chara took on the intimidating Tom Wilson, who stands six inches shorter and thirty pounds lighter than the veteran defenceman.

You can watch the fight here.

The fight happened to be Chara's first of the year, which isn't surprising given his freakish size and ability to ragdoll opponents. Wilson, who's invests in a local boxing studio in the Washington area, is no stranger to scraps, dropping his mitts for the second time this season.

You have to admire Wilson's courage for taking on the mammoth Chara. He even scored a knockdown, although Chara bounced back up as if nothing happened.

Here's how the hockey world reacted.

Big Chara and Tom Wilson just fought and I hate to admit this but Tom Wilson just held his own in that one. Capitals arena still insanely quiet, one of the quietest places in the world. Good fight.

Zdeno Chara and Tom Wilson drooped the gloves. The Bruins and Capitals always put on a show against one another... the top 2 teams in the NHL tonight

A fight featuring Tom Wilson and Zdeno Chara, and it wasn't on paper view pic.twitter.com/O0BMKeCR0Q

Tom Wilson vs Zdeno Chara worth the price of the season tickets. #Capitals pic.twitter.com/3ICK0KejkP

Who are you scoring the winner? Chara got the take down, put Wilson put up a good battle, so we'll say it's a draw.