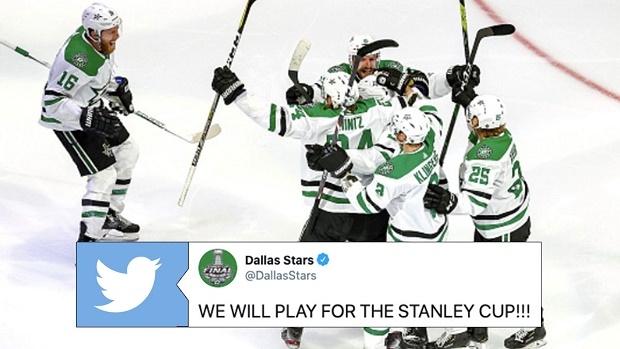 But it’s not about how you start, it’s about how you finish, and now the Stars are just four wins away from taking home the second Stanley Cup in franchise history after defeating the Vegas Golden Knights in five games.

The Dallas Stars are headed to the Stanley Cup Final after defeating the Vegas Golden Knights 3-2 in overtime of Game 5! pic.twitter.com/mEROo6PoLT

Once the Golden Knights got on the board it stayed like that for a while until they added to their lead with their second of the night. However, the Stars did what they’ve done in a lot of the games this postseason and season, and that’s find a way to come back late for the win.

I CANT BELIEVE THIS IS ACTUALLY HAPPENING!!! #GoStars

Anton Khudobin has played for 14 teams since 1994 waiting for this moment. He battled every moment in every practice and every game. Please do not call him an overnight success.
HE EARNED THIS!

The Golden Knights just can’t beat Joe Pavelski in the playoffs. How sad is that.

WE LOVE YOU DOBBY https://t.co/Z1REVGRmM2

Jamie Benn is going to the Stanley Cup final pic.twitter.com/mIBi2OINYE

WE ARE GOING TO THE FINALSSSSSS

Hockey should never lose sight of the importance of having savvy veterans with invaluable experience. 2 important additions the @DallasStars made in offseason that have played huge factors in advancing to #StanleyCup
Joe Pavelski & Corey Perry #GoStars

It’s Dallas’ first trip to the Stanley Cup Final in 20 years and they’ll play either the Tampa Bay Lightning or New York Islanders.