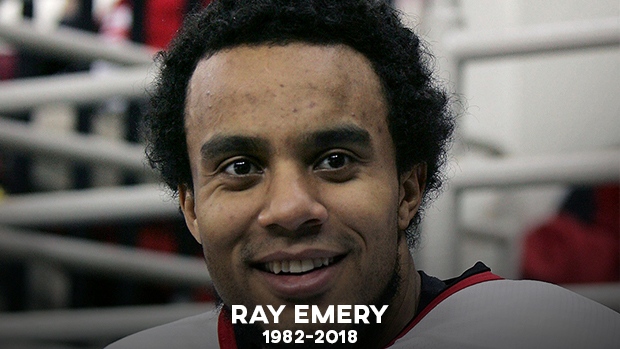 Emery was identified as a drowning victim in a swimming accident in the Hamilton Harbour. Just after 6 am, police received a call about a swimmer that did not resurface from the water. At 2:50 pm, Emery’s body was found nearby the Hamilton Yacht Club.

At 2:50 pm, HPS recovered the body of former @NHL player Ray Emery, 35. Emery was reported missing just after 6:00 am in #HamOnt harbour. His body was recovered in close proximity to where he was last seen. Family has been notified. Cause of death to be confirmed pending a PM.

Nicknamed “Razor,” Emery was an 11-year veteran in the NHL, Emery started his career with the Ottawa Senators, where he backstopped them to the Stanley Cup Final in 2007. Emery also suited up with the Philadelphia Flyers, Anaheim Ducks and with the Chicago Blackhawks. He was on the Blackhawks roster when they won the Stanley Cup in 2013. Emery last played in the NHL with the Flyers in the 2014-15 season during his second stint with the club.

Reactions around the league and in the hockey world came pouring in.

Our hearts go out to the family and friends of Ray Emery, our former goaltender, who passed away early this morning. pic.twitter.com/QmZJpd7hcM

So sad to hear the news of Ray Emery. You will be missed bro! #RIPRazor

My Best friend. My Brother. I love you! pic.twitter.com/YWDX2jm55t

Just heard the awful news regarding Ray Emery. He was a great guy. So sad. #RIPRay.

I will always remember Ray as a good person first & foremost. I envied his demeanor. He had a contagious personality. People were drawn to him. I made close friendships bc of him @DaveBolland I will never forget his selflessness. Man this hurts. Rest easy Uncle Ray Ray pic.twitter.com/hWsl9SNVwE

The NHLPA’s players and staff send our heartfelt condolences to Ray Emery’s family and friends, following the terrible tragedy that occurred earlier today. Ray will be missed by his many friends within the hockey community.

So saddened of the tragic news of Ray Emery’s passing. We played together for only a short time but he was a great teammate and competitor. My thoughts and prayers go out to his family and friends. May he Rest In Peace. 🙏

Ray Emery will forever be a legend for this moment. He may not be with us any more physically but that spirit will live forever. RIP to an absolute beauty of a human. Terrible. pic.twitter.com/kHzOP1VHHn

Hard not to think about some of the harsh comments made about Ray Emery 10 years ago when he played in Ottawa. A reminder life is fleeting, so be kind. #RIPRayEmery https://t.co/imWqavZo2T

Just now seeing the news of the drowning of former NHL goaltender and former Flyer Ray Emery. RIP Razor. He was a real good guy and gone too soon. pic.twitter.com/LCuwSg9W6g

Horrible to hear about the tragic passing of Ray Emery. He was an incredible NHL goalie that accomplished so much in the game, a lot of which went under the radar. He was also one of my favorite @TorontoMarlies teammates in his brief time with us. Rest In Peace to a legend #Razor

I'm a #stlblues fan but even I can admit Ray Emery chirping Barret Jackman from the bench in 2013 was hysterical. pic.twitter.com/yyxxqexa7O

Ray was a great teammate and an even better friend. Rest in peace Razor. I’ll miss you man. pic.twitter.com/NNHNc1Swyd

Talked a bunch of Ray Emery’s teammates today, so many of them echoing the same sentiment. “You were just drawn to him,” one said. “He was always positive, always upbeat.” https://t.co/pcKNh9gGTI

The Flyers Alumni Association is greatly saddened to learn of the tragic passing today of our teammate and friend, Ray Emery, in Hamilton Harbour earlier today. "Razor" will be greatly missed by all who knew him. pic.twitter.com/rTfTi7Qirp

The entire Warrior Hockey family is saddened to hear of the passing of former NHL goaltender and Warrior PRO, Ray Emery. Our thoughts and condolences are with the entire Emery family at this most difficult time.

Shocked to hear the news of Ray Emery. Rest in Peace.

“All the statistics in the world can’t measure the warmth of a smile...”
Rest In Peace my friend, Ray Emery#Razor @NHL @NHLFlyers @FlyersAlumni @NHLAlumni pic.twitter.com/I6SX5cKq8c

Hamilton Police have confirmed the death of former NHL goaltender Ray Emery. Emery drowned in the Hamilton Harbour. He was 35. ••• More on TSN.ca