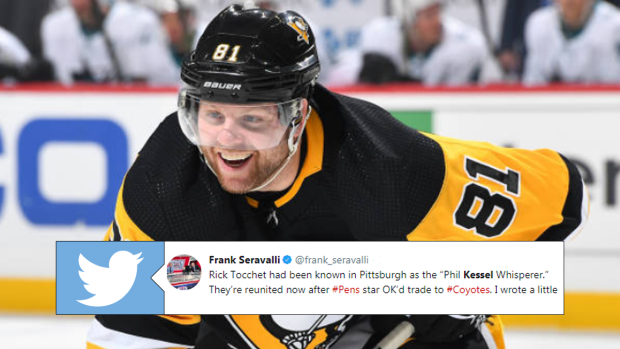 Phil Kessel is a two-time Stanley Cup champ as a member of the Pittsburgh Penguins, but if he’s looking for a third ring it appears it will have to be elsewhere. “The Thrill” appears to be heading southwest to the Arizona Coyotes as the long speculated Kessel trade was finally made.

Per Darren Dreger, Kessel is on the move with Dane Birks and a 4th in exchange for Alex Galchenyuk and Pierre-Olivier Joseph. With Phil always managing to perk up people’s ears, fans and analysts alike were full of opinions on the deal.

🚨 Kessel and a 4th reportedly on the move for Pierre-Olivier Joseph and Alex Galchenyuk 🚨 pic.twitter.com/pXZkxR7nn1

No salary retained. Some other pieces involved but the major elements are Kessel and Galchenyuk. https://t.co/bCUgNUfhal

Veteran Rutherford pulled back on Kessel trade...waiting for a decent prospect to emerge...and it did. https://t.co/E1PEdl1hR1

Rick Tocchet had been known in Pittsburgh as the “Phil Kessel Whisperer.” They’re reunited now after #Pens star OK’d trade to #Coyotes. I wrote a little about Tocchet/Kessel two years ago as @RealRocket22 was up for head coaching jobs:https://t.co/EkaafT9COX

When you see that Kessel was traded to Arizona pic.twitter.com/0AbeRuY9YE

Without the superstars of Pittsburgh around him Phil will return to his Leaf form. Book it.

This is where Phil needs to be...Hot weather, no chance of making the playoffs and having an extended season. Just the ability to mail it in for the rest of his career.

Thank you Phil Kessel for everything you did for this organization man best of luck in AZ bro imma miss you 😬😞 pic.twitter.com/5hINBi4GPc

It was great while it lasted! Phil Kessel will always be a 2x Stanley Cup Champion!! He was a pivotal piece in both championships!!! Thanks for everything! Good Luck in Arizona!!! #PhilTheThrill @PKessel81 pic.twitter.com/TPVEyLHBFC

All we have to say to Phil Kessel is THANK YOU! From the bottom of our hearts for the priceless memories! #Pens #Kessel pic.twitter.com/XENpViFVno

Phil Kessel would have been Arizona’s leading scorer by 35 points last season. Alex Galchenyuk adds badly needed youth and a bit of cost control in Pittsburgh.

It’s really hard to find a way to complain about this deal much for either side.

kessel is traded to the coyotes pic.twitter.com/ocd5TO0vY5