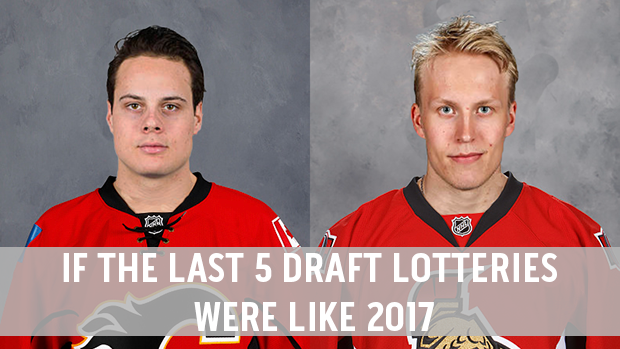 This year’s draft lottery was pretty upsetting for many NHL fans.

The fan bases for three teams were very happy, as the New Jersey Devils, Philadelphia Flyers and Dallas Stars all shot up the charts and will be drafting much higher than they were projected to.

New Jersey and Dallas had the fifth and eighth best chances, whereas Philadelphia was all the way down at 13th best chances. It really goes to show you how lucky the draft can be and how easily things can change for teams. Last year, the Toronto Maple Leafs were fortunate to finish last and receive the first overall pick, despite having an 80% chance of getting a different pick.

If you want to talk fortunate, just look at the Oilers who have too many 1st round picks to count. But what if every year ended up like this year? One Twitter user pointed out what the top six would have been like last year if it was picked like the 2017 lottery and it would have changed the entire landscape of the NHL.

So, that got us thinking, what would the last five drafts look like if they got the same unlikely outcome as the 2017 draft. It’s bizarre. Keep in mind, how the draft lottery works did change after the 2014 draft, so this would have only been possible in 2015. Still, it’s interesting to see.

We’re using the same draft order as every draft, because there’s no way to know how each team felt about a particular player.

The winners of this format have to be the Hurricanes who come out of it with Connor McDavid and Nathan MacKinnon. Things could have been very different.