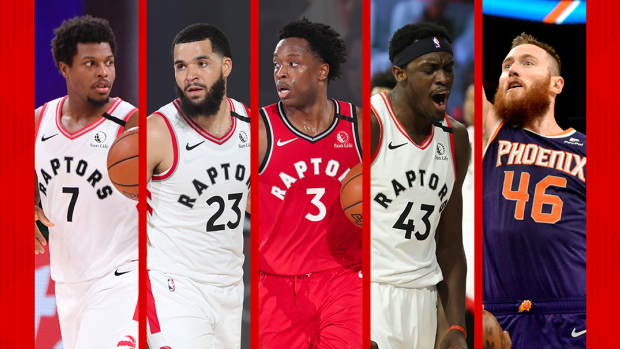 About this time a week ago, the horn sounded on what has been a compacted NBA free agency timetable. Teams are about to open training camps on December 1st, meaning that an entire offseason’s worth of business was basically conducted in the back two weeks of November.

Even without the usual number of big names hitting the market this year, all the movement can be hard to keep track of! The Raptors didn’t experience as much turnover as some other teams, crucially retaining Fred VanVleet, but with training camp just around the corner, why not a roster refresh?

NBA teams can bring up to 20 bodies to training camp, before trimming to the regular season limit of 15 players plus a pair of two-way contract slots. Including Harris, the Raptors would have 20 players.

Who starts at center?

If we had to make a guess for today, Aron Baynes would be the smart money to start at center. The Raptors paid him more money than Chris Boucher, and Baynes is coming off a career-best season with 28 starts for the Phoenix Suns last season.

With that said, this seems like it has the chance to be a training camp battle. Baynes turns 34 in December, and while Boucher was restricted to a third-string role last season behind Marc Gasol and Serge Ibaka, his per-minute stats are impressive and the Raptors are probably intrigued to see what he can do with an everyday role.

How often will the Raptors play small?

Behind Pascal Siakam, the Raptors’ back-up options at power forward are currently sparse. They could go for a twin-towers look with two of their centres, but that playing style is rarely seen in the modern NBA.

Instead, it seems more likely that OG Anunoby will toggle up to the 4 when Siakam rests, similar to last season. He definitely has the defensive chops to guard against bigger players, and that allows the Raps to get more of their perimeter talent on the floor.

Like the Siakam-Anunoby timeshare, we’ll probably see Fred VanVleet shift over to the de facto point guard role when Lowry is off the floor. With that said, the Raptors have historically used two-PG lineups for heavy minutes. They didn’t have that option with last year’s roster, but back in the Bench Mob days, Lowry and VanVleet would share time with Delon Wright.

That leaves the door open for Malachi Flynn to enter the rotation in Year 1 as a third point guard. It probably depends on his performance in training camp, but he’s an experienced four-year player at the college level, and Raps fans would love to see their first round pick make an impact right away

If you're the sort of diehard to analyze preseason hoops in details, then first of all, we tip our hat to you, and second, these are probably the storylines worth watching when basketball returns!