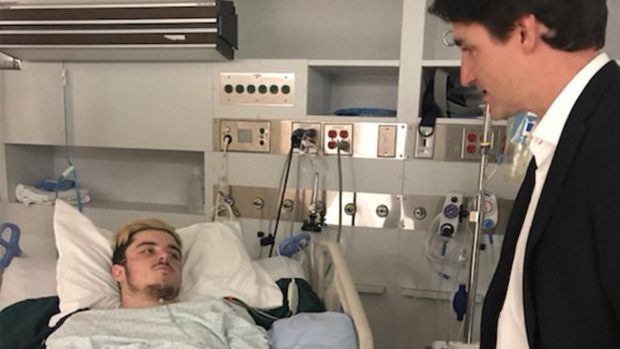 Among the survivors of the Humboldt Broncos bus crash, which tragically killed 15 people and hospitalized another 12, is an 18 year old defenseman for the Broncos named Ryan Straschnitzki.

According to the Calgary Herald, Straschnitzki sustained a broken back in the crash. After spending seven hours in surgery, he was told that he would retain movement in his arms and head, but will suffer paralysis from the chest down.

However, he isn’t allowing that to deter him, and already plans on making his return to the ice as a hopeful Olympic sledge hockey player.

“He keeps wanting to try and move his legs, of course, because he wants to go back skating. He just looked at me and his mother and he goes, ‘well, I’m gonna get onto the Olympic sledge hockey team.’” —Tom Straschnitzki, father of Ryan

After waking up from surgery, the Herald reported that Straschnitzki, surprised by the outpouring of support shown for him and other victims of the crash, spent two hours looking through his phone.

Among those who have visited Straschnitzki in the hospital so far have been Prime Minister Justin Trudeau, head coaches Glen Gulutzan and Todd McLennan of the Calgary Flames and Edmonton Oilers, and former NHL player Sheldon Kennedy (who was involved in a similar incident in 1986 that left four of his junior hockey teammates dead):

We may not agree on Politics. But we sure do agree on Support. sure am proud our Prime Minister and his son showing up and chatting hockey. Thank you very much. pic.twitter.com/czD3BXhPTJ

@NHLFlames @EdmontonOilers Even the Flames and Oilers can put aside the battle to join together to help fight a different battle. Thank you so much Todd and Glenn. Ryan will be ready in September pic.twitter.com/540FXU76k7

As of Monday night, a GoFundMe fundraiser set up for the families of the Broncos players has surpassed $6 million. You can donate to the fundraiser here.