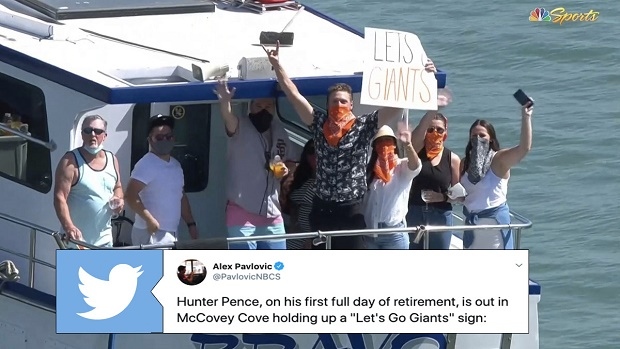 Hunter Pence announced he was walking away from baseball through a video message on social media on Saturday night.

In his message, the 4-time All-Star and 2-time World Series champion mentioned that since he’s no longer playing for the San Francisco Giants or in Major League Baseball in general, he’s now going to spend his time cheering on the Giants.

Pence’s first day of retirement he was out on the water in McCovey Cove cheering on the Giants, sign and all.

Hunter Pence, on his first full day of retirement, is out in McCovey Cove holding up a "Let's Go Giants" sign: pic.twitter.com/NP1nEql8Jr

If you have a kayak, Hunter Pence is now signing autographs out in the cove: pic.twitter.com/9OR82JbyTv

It’s very easy to see why he was a fan favourite wherever he played.