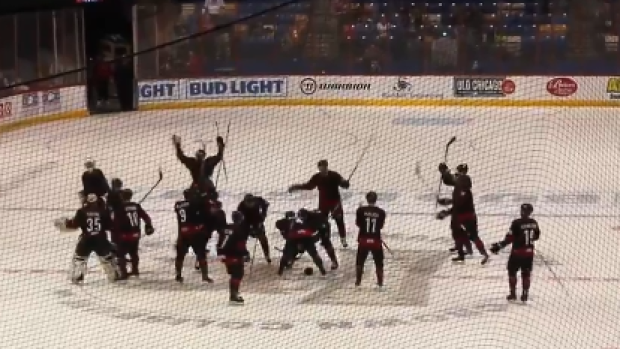 The Carolina Hurricanes' post-game Storm Surges are rubbing off in the hockey world.

Last year, we saw the Canes debut their dances after Don Cherry's accused the team of being a bunch of jerks. There were minor-hockey teams that used it as inspiration, and now, a professional club is following suit.

The Fayetteville Marksmen of the SPHL (Southern Professional Hockey League) stuck to their southern roots and decided to play a little football after defeating the Roanoke Rail Yard Dawgs.

Just like the @Canes, we win therefore we Surge.

Much like the Canes, the skated to centre and hit the Viking clap before going into a football formation.

Using his glove as the football, winger Brian Bowen connected with Malcom Hayes for a big "down-ice" pass.

Fayetteville celebrated the Storm Surge on their own Bunch of Jerks promo night: they wore custom 'Canes tribute jerseys, and welcomed Stormy the Mascot, the Storm Squad cheerleaders and Hamilton The Pig to the game.