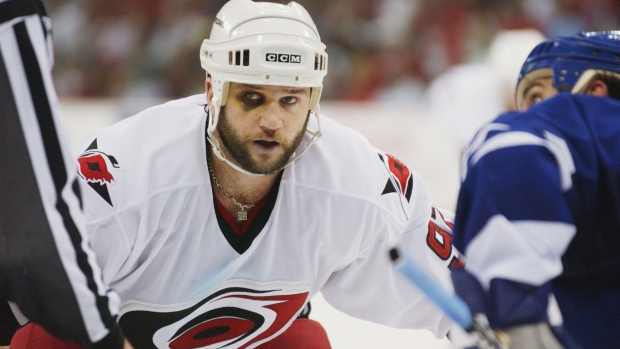 TSN Hockey analyst Jeff O’Neill had a short, but great NHL career that lasted nine seasons split between the Hartford Whalers and Carolina Hurricanes franchise, and the Toronto Maple Leafs.

Nicknamed the “O-Dog,” O’Neill is third all-time in points scored in the Hurricanes history with 363.

On Wednesday night during the Canes game against the Tampa Bay Lightning, O’Neill was honoured with a video tribute at PNC Arena for his contributions to the club. Fans gave the Hurricanes legend a solid ovation despite O'Neill not being present in the building.

@odognine2 will forever be one of my favorite players to play for the Canes. #EyeOfTheStorm pic.twitter.com/Nja75XW4S3

The 41-year-old is a co-host with fellow TSN Hockey personality Jamie McLennan on the popular OverDrive radio show on TSN 1050 in Toronto hosted by Bryan Hayes.

The former Maple Leaf recently helped string together over  $6,000 to the Etobicoke Humane Society.

We were honoured to host @RyanCP23 & @odognine2 at the shelter. #Gratitude aplenty for their generosity and support. pic.twitter.com/4nQkoFFctl

O’Neill recorded four straight 20-goal seasons in Carolina from 1999-2003. His biggest accomplishment, though? O’Dog has a beef dip named after him at The Irv Gastro Pub in Toronto.

Had a little O’Dog this afternoon at The Irv and it was delicious. @odognine2 @theirvpub @OverDrive1050 pic.twitter.com/WeQzNkyUue