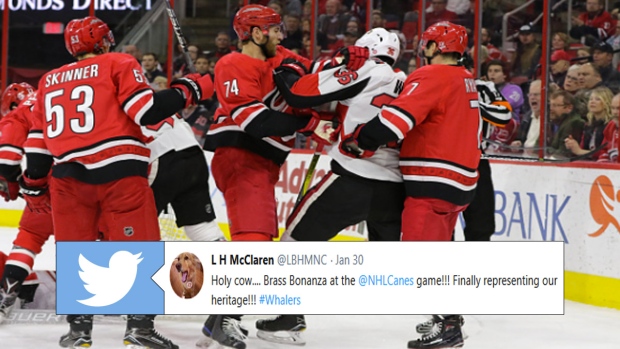 The Hartford Whalers haven’t been an NHL team since the 1996-97 season, but their fans still have faith in a team returning to Hartford someday in the near future.

Although there aren’t any immediate plans of bringing a team back to Hartford for the time being, Carolina Hurricanes owner Tom Dundon went on ESPN 99.9 The Fan earlier this week and he made his intentions of bringing back the Whalers logo very clear.

"I think we should have a store that sells that Whalers merchandise online and we should explore playing games in that jersey and selling that gear. It's part of the legacy," said Dundon. "And I just like cool stuff. If we don't, it will mean something went wrong."

The Hurricanes took things a step further on Tuesday night during their home game against the Ottawa Senators by playing the Whalers’ old theme/fight song ‘Brass Bonanza’, which was played before periods and after goals at Whalers home games, during a break in the action.

The team used ‘Brass Bonanza’ as their theme song up until the 1992-93 season when Brian Burke took over as the general manager and ended the tradition.