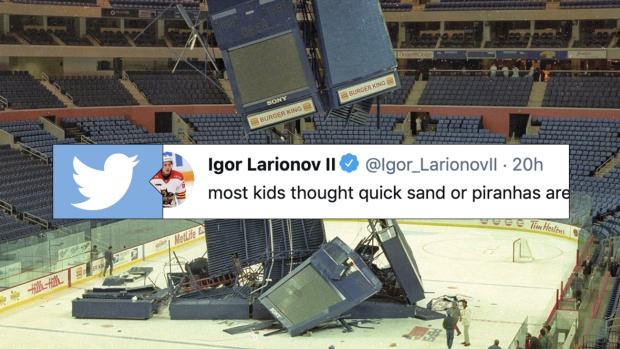 Some hockey fans might not know this, but on November 16th, 1996, the Sabres jumbotron came crashing down on the ice as it was being remotely moved.

#OTD in 1996 oh dear, the Buffalo Sabres new 4 million dollar jumbotron is put on injured reserved as it comes crashing down on the ice at the new Marine Midland Arena. pic.twitter.com/tA9VEk2rBu

The incident occurred just minutes after players left the ice from practice.  Thankfully nobody was hurt, but the image of the jumbotron on the ice struck fear into the heart of one Igor Larionov II, the great Igor Larionov's son.

i remember i saw this picture when i was like 4 or 5 and had the biggest fear that the jumbotron at the joe would fall and crush my dad lol pic.twitter.com/adoxvM796F

most kids thought quick sand or piranhas are immediate dangers in everyday life, but not me hahah. i was scared of jumbotrons https://t.co/ZWrvVYGbc9

Most kids are scared of spiders or tornadoes, things of that nature, but the fear of a jumbotron falling to the ice during a game is rare, yet terrifying.  Next time we're able to play hockey again in a rink that has a jumbotron, we might avoid skating directly underneath it for a few shifts.