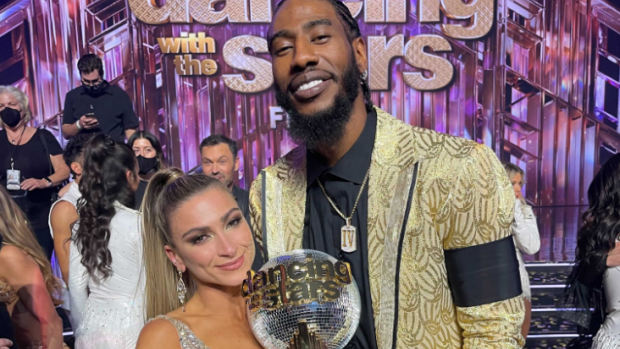 Daniella Karagach, Iman Shumpert , (via Dancing With the Stars)

Five years ago, Iman Shumpert was celebrating becoming an NBA Champion with the Cleveland Cavaliers. Last night, Shumpert celebrated a wildly different title – he is now officially a winner of Dancing With the Stars.

Dancing with professional dance partner Daniella Karagach, Shumpert proved that he had the moves to put the world on notice. During Monday’s finale, Shumpert and Karagach danced a Cha Cha to Earth, Wind, and Fire’s pop disco classic ‘September.’

Iman Shumpert and Daniella Karagach dance a Cha Cha / Foxtrot Fusion to “September” by Earth, Wind & Fire on the Dancing with the Stars Finale! pic.twitter.com/zIpRkS4ciO

While that was cool, the real highlight was this freestyle hip hop routine to Missy Elliott’s Lose Control / Bounce.

Unreal. Shumpert straight up looks like he could have a career as a professional dancer with a little more fine tuning. Not bad for a basketball player!!

(H/T Dancing With the Stars)