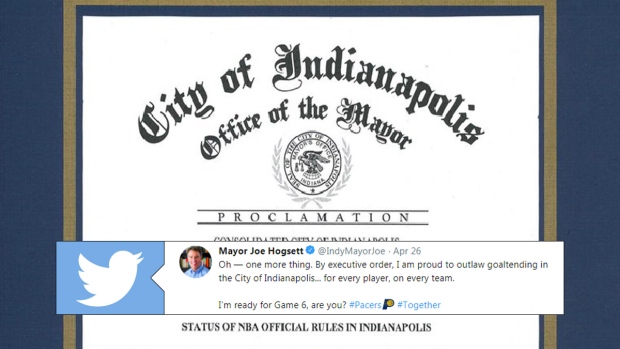 Indiana Pacers fans are still upset about the missed goaltending call at the end of Game 5 that turned into a LeBron James buzzer-beater, and they want to make sure it doesn’t happen again to them on their home court in Game 6.

On the eve of the win-or-go-home game for the Pacers, Indianapolis Mayor Joe Hogsett went ahead and outlawed goaltending in Indianapolis, for every player on both teams.

Oh — one more thing. By executive order, I am proud to outlaw goaltending in the City of Indianapolis... for every player, on every team.

I’m ready for Game 6, are you? #Pacers #Together pic.twitter.com/JDKnufwWq9

Hogsett also declared Friday “Blue and Gold Day” in Indianapolis and asked Pacers fans to rock as much gear as possible to show support for the club.

Ahead of Game 6, tomorrow is officially declared “Blue and Gold Day,” in the city of Indianapolis! To all the @Pacers fans — wear your lucky shirt, jersey, hat, or colors! pic.twitter.com/7GqbApQWQv

The Indy Fuel, the city’s ECHL club, had some fun with the announcement and reminded the mayor it might not work out for them.

Mr. Mayor... This could be slightly problematic for us. pic.twitter.com/0G0OfN7xVg

However, he quickly cleared up that it was just for basketball and not for them.

The Pacers will need to pick up back-to-back wins over the Cavs if they want a taste of the second round, but first they need to get through Friday night’s contest.