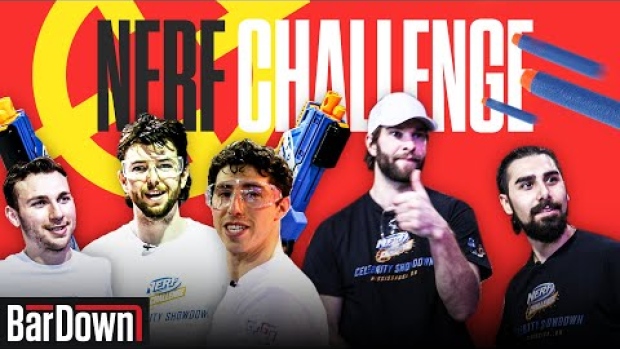 So… we participated in a massive nerf gun competition… with the Toronto Maple Leafs. Well, a few of them. And let us tell you…

GYGO! (“Get Your Game On”) opened its state of the art entertainment centre at Square One in Mississauga, and we were fortunate enough to get the invite, along with Jack Campbell, Michael Bunting and Timothy Liljegren. Soup and Tim led captained Luca and some other influencers around the city, while Jesse and Corwin teamed up with Bunts. $10,000 for charity was on the line, so both teams gave it their all!

Check out the activities that took place inside the 26,000 facility.

Wow… and just when Corwin and Jesse thought they had it. Definitely felt some 2017 Oscars vibes there.

Couple of key observations we made from our NERF experience. 1) Jack Campbell is quite possibly the nicest individual we’ve ever met. Bunts and Tim are also huge beauties. 2) Corwin should be a baseball player, not a basketball player. What were the hucks? 3) Jesse and Tim should never hit a basketball court again in their lifetimes. 4) Luca’s the real MVP when it comes to NERF.

Watching is one thing but you’ve gotta expeience this for yourself! Head over to GYGO! With some buddies and give it a try… you won’t regret it. What an experience!